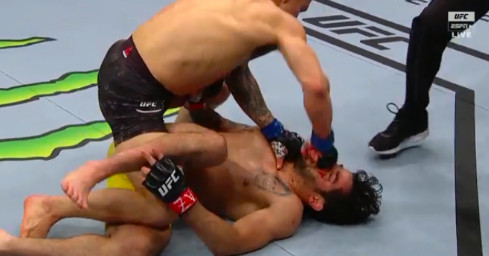 The long decline of former UFC bantamweight champion Renan Barao continued on Sunday, this time in the hands of Luke Sanders.

Barao showed flashes of his old man in the first round of his UFC Phoenix preliminary fight, hitting Sanders' body hard.

But in the second round, Sanders decided to go back inside, and things rushed south for Barao. Sanders finished at 1:01 of the round with nasty strikes.

That's four straight losses and seven out of nine for Barao. Sanders, on his side, straight up the boat after a sequence during which it was finished three times out of four.

You can see the highlights of the Sanders TKO finish below: