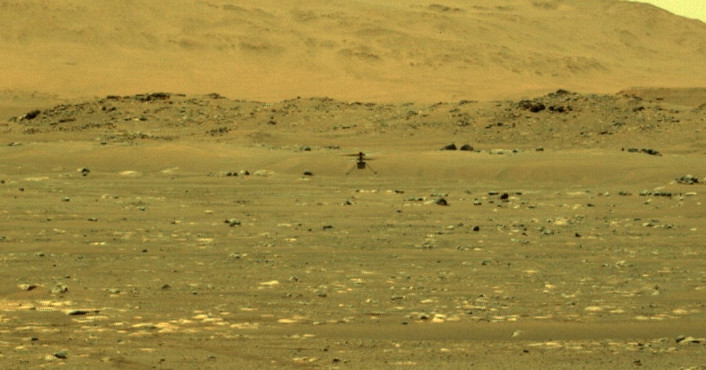 NASA has just released video and audio of its mini Mars helicopter, Ingenuity, flying around the Martian surface during its fourth flight test, as captured by the craft’s robotic partner, Perseverance, from a distance close to a football field.

The footage, combining audio and video from an Ingenuity flight test for the first time, begins with the gentle hum of the Martian wind. Ingenuity can be seen hovering on the surface in the right corner of the frame before taking off for flight. As the helicopter climbs, the ambient hum increases; the low, muffled sound of Ingenuity’s twin rotor blades spinning at 2,537 rpm is heard and it eventually slips through the frame.

Perseverance’s Mastcam-Z camera captured the video, a sequence of hundreds of images compiled at six frames per second. This camera has sent back stunning images and videos from Ingenuity in the past, but those views have never synced with audio until now.

The audio was recorded using Perseverance’s SuperCam laser instrument, a device that zaps rocks on Mars with a laser beam and records the zapping sounds with a built-in microphone. While a spectrometer visually analyzes the composition of the dust raised by the laser, the microphone picks up the audio to help scientists get an aural idea of ​​the hardness of the rock.

“This recording will be a gold mine for our understanding of the Martian atmosphere.”

This microphone worked overtime last Friday to bring us the first audiovisual experience of Ingenuity’s fourth flight in its legendary test campaign.

SuperCam’s microphone science chief David Mimoun said in a statement that previous tests on Earth indicated the device would barely be able to hear Ingenuity’s flight. But hearing the soft hum of the helicopter’s blades on Mars was “a very pleasant surprise,” he said. “This recording will be a gold mine for our understanding of the Martian atmosphere.”

The four-pound helicopter arrived on Mars nestled inside NASA’s Perseverance rover on February 18 and was deployed to the surface on April 4. Its first flight, on April 19, went down in history as the first to take place on another world. Initially, engineers planned to run just five demonstration flight tests with Ingenuity in a 31-day window so that Perseverance – working both as a photographer and communication center for Ingenuity – could continue its primary mission of researching signs of old life.

But the engineers, impressed with the helicopter’s performance, gave Ingenuity another 31-day mission to do a few more flights while Perseverance begins its hunt nearby.