"We'll stop Hoover if we have to do it," says an event organizer at the Alabama Mall 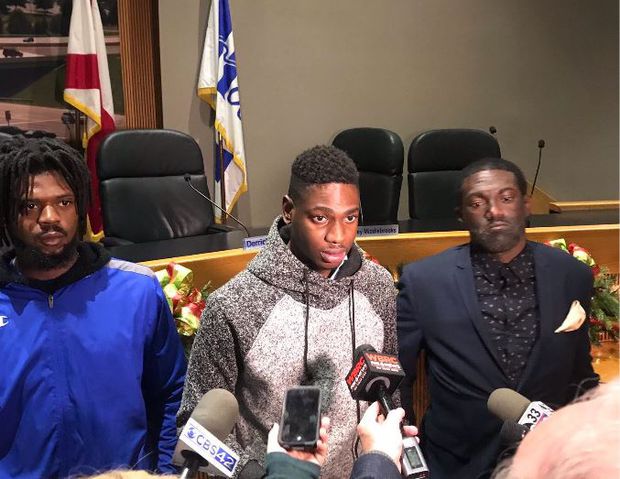 Birmingham activists have said that their protests against the deadly shooting of a man inside the Riverchase Galleria by the police will continue every day until they see the blame , transparency and receive the answers that they ask for.

"You know me, we will continue to do what we are doing, we will continue our peaceful demonstrations of civil disobedience," said Carlos Chaverst, "If we are to close the entire city of Hoover, we will do it. to prevent everyone in Hoover from spending another penny here, we will do it.We will do everything in our power to attract more attention, more awareness and more justice. "

Chaverst's remarks were made in front of the Hoover City Hall, where the city's leaders held a meeting at 12:15 pm. Once the meeting opened, the city council chair, Gene Smith, consulted with the city's lawyer about the opening of the executive session – which excludes the public and the media – to discuss a "pending or threatening" litigation following the fatal shooting on November 22nd. the mall, which according to the lawyer was appropriate under the Alabama law.

The shooting took place on Thanksgiving night on the second floor of the gallery in front of Footaction, near J.C. Penney. When it was over, 21-year-old Emantic Fitzgerald "EJ" Bradford was shot dead by police. His 18-year-old friend was injured and remains hospitalized. A 12 year old passerby was also injured and was released from hospital on Monday with a bullet still lodged near her spine.

Authorities said the incident began with an altercation between Bradford and his friend and at least two other young men, a possible release of sneakers that night. They did not specify who fired the shots that had injured the teenager and the 12 year old.

The shooting provoked several demonstrations, including a Saturday at the shopping center. A Monday night demonstration began in front of City Hall and continued along US 31 to Galleria Riverchase. The protesters want the Hoover police to release the videos for public scrutiny. They also say they are unhappy that Bradford's family has not heard from Hoover officials.

Other demonstrations are scheduled for Tuesday night, at 6 pm, at Hoover Town Hall, but Mr. Chaverst announced that they would also visit other places in Hoover. . He did not elaborate publicly.

"We come in peace, but when we face the force, we will react and act accordingly. It's just a warning to the Hoover Police Department, "said Chaverst. "They have been a little cooperative up until now because they do not want to kill more black men, so they have to do what they have to do to stay in the house." away now. "

He said that while they came in peace, they were upset, frustrated and angry at not having the answers they wanted.

"Whatever force is encountered, we will react and act accordingly," he said. "But you can not dictate and determine the frustration."

During the Monday night protest, there was at least one incident in which a motorist attempted to cross the crowd while walking in the middle of the US screen. 31. A video of this incident showed protesters bang against the vehicle of the motorist. "No one deliberately banged anyone's vehicle. When you have a vehicle that deliberately tries to cross a crowd of people and hit people, yes, we will act and react accordingly, "said Chaverst." There was no incident when someone was just beating cars. "

President Chaverst and activist Le'Darius Hilliard said they were stunned. The council met in a leadership session on Tuesday without hearing from the public.

"There are empty seats in the council chamber of a city that has murdered a black man. And there are no questions asked, "said Hilliard. "Use your investigative power. Do not sit idly by. You have an outcry from the community. all we want are answers. All you have to do is oblige because you were wrong. If you were not mistaken, all those people would not be here.

"These whites do not give us answers," said Chaverst. "It's as simple as that."

Rev. Charles Winston Jr., pastor of New Mt. The Hueytown Missionary Moriah Baptist Church, moderator of an association of more than 150 churches in Jefferson County, as well as tax assessor Bessemer Cutoff, stated to be present to see how the city's representatives would react, if any. "I hope they'll be the leaders to create a calm in the process," Winston said.

Winston, who is also African-American, said any violent protest was premature at this stage. "I realize that people sometimes have to share their emotions and express themselves, and I think that's what we see with the demonstrations at this point. I think it's premature, "he said. "I will participate, I will be a leader if the process fails."

Winston said the community should book the protests until all the evidence is collected and published.