What's in your bag, Matoma? 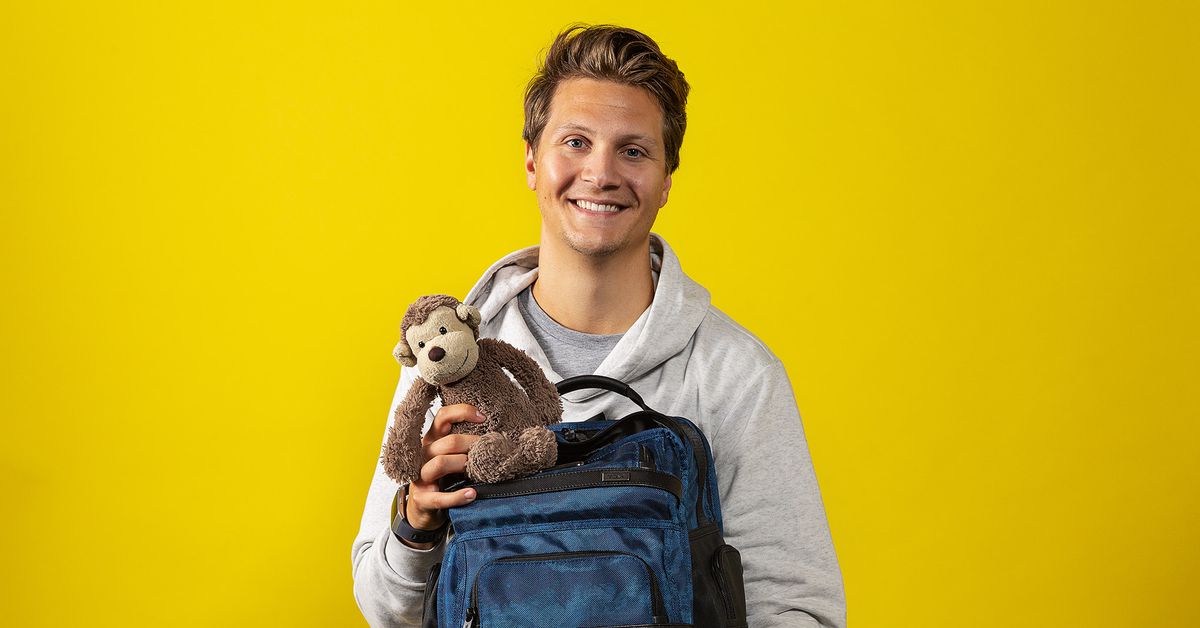 What is in your bag? is a recurring feature in which we ask people to tell us a little more about their everyday gadgets by opening their bags and their hearts. This week we feature a producer of house and tropical pops Matoma.

The Norwegian artist Matoma, born Tom Lagergren, enters The edge offices with a bright, bouncy layout that matches the music that he creates. Renowned for his inspiring mix of genres and dance, from hip-hop to funk to house, Lagergren has not only enjoyed commercial success with his original works, such as the recently released single "Sunday Morning," but he is often sought after. to collaborate with heavy hitters such as Jennifer Lopez, Noah Cyrus and Enrique Iglesias.

Growing up, Matoma intended to become a music teacher instead of being an artist on tour. He learned classical piano, started making music on his laptop, became a resident DJ in some places in Norway, then went to school to pursue studies in music production. But once he started releasing remixes on SoundCloud, people rushed on his songs. Very quickly and unexpectedly, Lagergren had a fan base.

Now, Lagergren finds his days busy with busy tour programs and studio sessions with some of the biggest names in music. He is currently in the middle of an international tour that ends at the end of March. Now his busy schedule, which sometimes allows him to play several times a day, is second nature. We asked Lagergren to throw away his bag so that we could take a look at what is needed to maintain mental health when the life of the tour is daily.

Have you traveled a lot lately?

On this trip, I leave 12 days and I do six concerts, so it's not too much. When I did my tour last year, I did 48 gigs in 52 days. Some days we did two shows a day. The summer was also crazy with the festivals. I think we did 80 concerts in a few months.

Well, I'm glad we had a day of relaxation. It must be like a spa for you! The first thing that concerns me is where does the name Matoma come from?

The name Matoma comes from my brother. My brother and I lived together when we were both in college. He wrote his masters in chemistry and I got my bachelor's degree in music production. We had this party after a Calvin Harris concert. All our friends came to the party. We drank and had fun.

I had another name at the time and I was starting to publish remixes on SoundCloud. My brother came to me and said, "Tom, your music is starting to sound really good. But, I have to tell you this as your brother and for love – your name is shit and you have to change it. "

I got a little upset and it sparked a fight. One of my friends misunderstood the conversation and said, "Guys, can not you take life so easily The Lion King? Hakuna matata! My brother hugged me, but he was a little drunk and misbehaved. He said "hakuna matoma". And I thought, oh, fly, Matoma, it's sick. To make sure we do not forget it, we found a marker and wrote it on the living room table. The next day, when we woke up hangover, we went downstairs and on the living room table, he told Matoma. This table was a gift from my parents when we moved in. [Laughs]

I wanted to talk about the single you worked on with Enrique Iglesias. That was on your list, right?

Oh, the process was amazing. We were working on this song for a year and a half. I was in studio with him in December 2016. We have just spent three days in the studio as incredible and fun. Subsequently, we did not hear from him for a few months. But then his camp and his team came back and they loved it. And his label, RCA, loved it. Then we tweaked the song to perfection. I was so lucky to have it as a single for myself and to have it featured and collaborated. He wanted it for his album. For him, it was an important decision and a big step forward to give it to me as a single person. He really trusted me in this process. And for that, I am grateful. He was so nice and included everyone in the room.

Let's start by looking through this bag. It's amazing how comfortable and orderly your cable organizer is. And here is a Sony camera.

Yes, I got it for a really cheap price from my photographer. He bought a new camera and I told him I wanted to buy his old one. He is one of my best friends.

My girlfriend [laughs], nature, the process of travel. I also have a drone. When I was in Ireland, I liked to photograph the cliffs and the fields.

What are these headphones?

These are the Sony WF1000X. I use them to talk on the phone and listen to music. For me, Sony is the best travel headset because of the sound quality. I think they are much better than the Bose headphones and the noise cancellation is about the same. Maybe Bose is about five percent better with noise cancellation, but it's hard to hear the difference. But with the sound quality, the difference is easy to hear.

I use them when I work seriously. They also have Bluetooth so you can talk on the phone with them. And they are easier to use when you walk around and you do not want to use big helmets. And then I have these other Sony headphones for when I produce.

How many different types of headphones do you think you have gone through?

Oh, I think maybe 20 different. I am very particular with the sound.

D & # 39; agreement. Thus, the ear cups that you use when you work and the headphones are designed to allow you to produce effects. Is it right on the road or elsewhere?

No, just for the road. I have my studio headphones at home. They are a bit more expensive and by a brand called Audeze. They are bamboo.

Which phone do you have?

So, it's the iPhone 8. I hate it. I have an iPhone since the first. They are becoming more and more terrible.

When you're on the road and inspired, how do you take ideas?

I just keep it in my head. I've been very lucky, since I was a child, I have a photographic memory. So when I have melodies in my head, they get stuck there.

I heard you were collecting sounds.

Yeah. When I got my Bachelor's degree in music technology and production, I always had a microphone with me. Wherever I went, if I heard an interesting sound, I would record it. I've also recorded my own drum, piano, saxophone, guitar and percussion libraries. I therefore have a library of almost two terabytes of sounds that I have recorded.

Do you play all these instruments?

So when I sampled instruments, I played every note. I play the piano, so here too I recorded all the scales and all kinds of different chords on a big one. All with different attacks and supports. If I work on a plane and do not want to write all those notes, I can just grab those chords. I've also created my own plug-ins for each instrument.

I also have a lot of nature sounds. I have a library of rock sounds. Birds, applause, cars, ambient noise, so many different things.

Are these samples in the cloud or on a USB key?

Why did you record all this?

Five or six years ago, it was not so easy to find samples online. So I did everything myself. But now there are sites, like Splice, where they have all the samples you need and you can buy credits to download what you want. It's like Spotify, but for samples.

I studied classical music as a child until I was 16 years old. I had a scholarship, but at one point it was no longer fun to practice so much and to play the music of others. So I stopped. Then I started recording, producing and composing my own music.

Agree and then we have …

Herman is the most popular little stuffed monkey of all time.

Yes, I think I have been to 80 countries with him.

And then I have my glasses. Usually, I do not wear contact lenses. I wear glasses. But when I play concerts and I'm on tour, I carry contacts. Then I have another Tumi bag with cables. Glasses for flying. Nasal spray. Two pairs of sunglasses.

What are these cables for?

For my MIDI keyboard. The keyboard is too big, so it's in my suitcase. I also have a portable charger and a USB cable for my phone. I would have my laptop but I had to leave it at the hotel as I was putting rods online. It's a MacBook Pro.

You also have a FitBit. What is your favorite thing about this?

I track down and it also gives me my messages. You can have a conversation with someone, get notification of the message, then watch the watch and read it quickly. So I do not need to take my phone out. It also has interesting features, such as displaying your heart rate and telling you if you have been sitting too long.

I must say that I like that you have a real book.

Yes, I usually bring them whenever I travel. I always try to read a book.

This is a police officer who worked in the police for 30 years. He had a division where his team was working on the fight against drug-related crime in Oslo. There was a big deal at the news of his corruption. But basically, it was set up by his own collaborators and they returned it. All the files he was working on were reclassified so that he could not talk about it in court. He is 21 years in prison and in his fifties. He devoted his life to the police and the case for which he was convicted was a case he was working on, but he could not talk about it because it was one of the biggest drug cases in Norway. .

[Looks at phone] Oh wow, we are number two on iTunes in Finland. Already!

Until now, the reaction on "I'm not dancing (without you)" has been incredible. It's amazing. When I showed it to my mother, she said, "It's by far your best song, Tom, and not just because of Enrique." [laughs]

Vox Media has affiliate partnerships. These do not influence the editorial content, although Vox Media can earn commissions for products purchased through affiliate links. For more information, see our ethics policy.