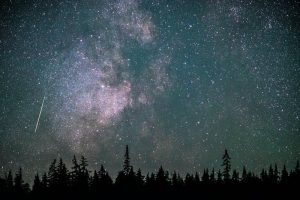 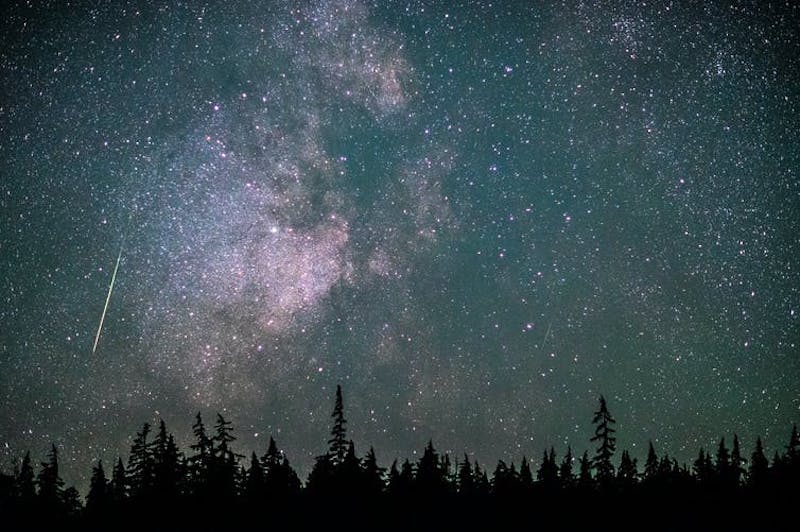 A shooting star during the Perseid meteor shower. Soon, thousands of satellites will invade the night sky. Image via Shutterstock / The conversation.

By Samantha Lawler, University of Regina

I walk past my rural Saskatchewan home before dawn and look up, expecting my breath to be breathless at the large number of stars above my head. I am a professional astronomer, but still enjoy stargazing with the naked eye as much as an enthusiastic child. It is the first place I lived that is dark enough to easily see the Milky Way, and I am stunned and in awe every time I look up.

I was excited to see man-made satellites, but now I know what’s coming. We are about to undergo a dramatic transition in our satellite experience. No longer will you escape your city on a camping trip and see the stars unobstructed – you’ll have to look through a grid of crawling, glowing satellites no matter how far away from your location.

If the mega-constellations of satellites become reality, the night sky will become an unremarkable highway of moving lights, obscuring the stars. Now, every time I see the glowing reflection of a satellite tracking the stars, I remember what has already been approved by the United States Federal Communications Commission, the agency that regulates the frequencies broadcast by satellites. in the United States, effectively putting itself in charge of regulating every space launch on the planet.

SpaceX has already received approval for 12,000 Starlink satellites and is requesting 30,000 more. Other companies are not far behind.

The Starlink mega-constellation itself would increase the number of active satellites tenfold: there are about 3,000 active satellites in orbit; Current Starlinks are brighter than 99% of them because they are in lower orbits, closer to the Earth’s surface, and more reflective than the engineers at Starlink anticipated.

SpaceX launches sets of 60 satellites every two weeks, and there will be a thousand Starlinks in orbit by Christmas 2020.

Time-lapse photograph of the Lyrid meteor shower from April 2020. At 12:50 am, a train of Starlink satellites zooms into the landscape.

With the naked eye, stargazing from a dark sky allows you to see approximately 4,500 stars. From a typical suburban location, you can see around 400 of them. Simulations show that from 52 degrees north (the latitude of Saskatoon and London, UK), hundreds of Starlinks will be visible for a few minutes. hours after sunset and before sunrise (comparable to the number of visible stars) and dozens of these will be visible all night long during the summer months.

Light pollution has long been a threat to stargazing, but at least it can be avoided by leaving urban centers.

But satellites will be a global star-obscuring phenomenon, especially bad at latitudes in the northern states of the United States, Canada, and much of Europe.

To their credit, SpaceX and Amazon – which also invests in satellite Internet services – have voluntarily started participating in discussions with professional astronomers about possible ways to mitigate the effects of thousands of bright satellites on specific observations, such as interstellar objects.

SpaceX also tried a “darksat” coating, although preliminary measurements by astronomers showed it to be only slightly weaker than other Starlinks. Meanwhile, the launches continue with some brilliant and unconditional Starlinks.

The simulations show that professional astronomy and amateur astrophotography will be severely affected by bright mega-constellations. The discoveries of dangerous near-Earth asteroids will be especially devastated by the hundreds of Starlinks confusing their targets, leaving Earth more vulnerable to world-altering impacts.

The goal of the Starlink mega-constellation is to provide global Internet access. Starlink supporters often claim that it will provide Internet access to places on the globe that are currently not served by other communication technologies. But the information currently available shows that the cost of access will be too high almost all locations requiring internet access. Thus, Starlink will likely only provide an alternative to residents of wealthy countries who already have other means of accessing the Internet.

Even if SpaceX changes its plans, other companies are actively developing separate mega-constellations, and there are more in the works.

Currently, there are no rules on the orbits or grip of the satellites, and if a collision (or multiple collisions) did occur, it’s unclear who would be at fault and who should clean up the debris (if it was). is even possible to do). The only international law that applies to satellite debris, from 1972, basically says that the country that launched the satellite must clean up any mess it leaves on the Earth’s surface after it crash.

Space debris – or orbital debris – is a growing problem.

Today, most satellites are launched by private companies, not governments, and most satellite debris remains left in orbit because there are no cleaning rules. There are thousands of pieces of this space junk, ranging from bolts to dead satellites the size of a bus.

With tens of thousands of new satellites approved for launch, and no laws on orbit congestion, hold or space clean-up, the stage is set for the dire possibility of Kessler syndrome, a cascade of debris that could destroy most satellites in orbit and prevent launches for decades.

As humans we have a deep connection to the stars that date back to the dawn of humanity and, indeed, we are made of ancient star material.

The Native Skywatchers program celebrates humanity’s centuries-old love for the night sky and shares indigenous knowledge of astronomy. A Dakota Elder recently shared her TK: The Spirit of the Blue Woman To Win lives in Wichakiyuhapi (the Big Dipper), where she guides the Star Nation’s new babies into our world and waits to greet our spirits. at the door as we leave our world.

Big companies like SpaceX and Amazon will only respond to legislation – which is slow, especially international legislation – and pressure from consumers. Is having another internet source worth losing access to unobstructed stargazing for yourself and almost everyone else on the planet? Our species has been stargazing for thousands of years, do we really want to lose access now to a few big companies?

On your next clear night, go outside and look up. Take advantage of the stars you can see now, because without big changes in the plans of companies that want to launch mega-constellations, your view of the stars is about to change dramatically.

This article is republished from The conversation under a Creative Commons license. Read the original article.

Bottom line: How SpaceX Starlink satellites and other mega-constellations of satellites will change the look of our night sky and our stargazing experience.