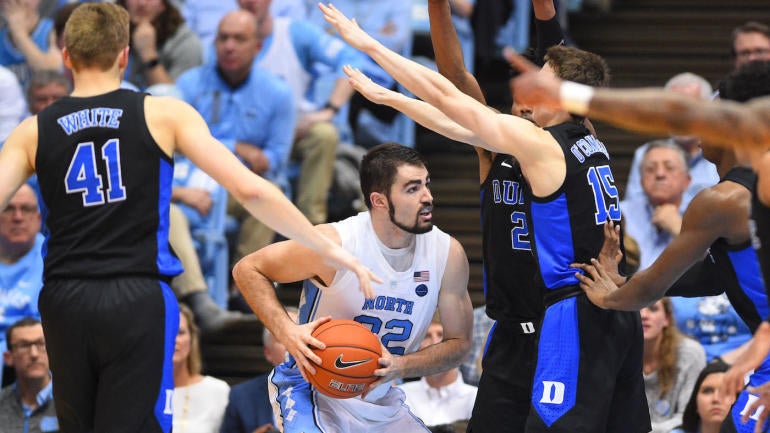 Many people associate with the NCAA Tournament, but here's a pro tip: chaos is not exclusive to the 68-team event that takes over the sports calendar from mid-March to early-April.

Just take Saturday as an example.

Between No. 5 Tennessee and his chances to win an upright Auburn, Seton Hall and Georgetown throwing a monkey wrench in the Big East race with wins over No. 23 Villanova and No. 16 Marquette, and No. 3 North Carolina again handling No. 4 Duke, disarray and upheaval were a fixture across the landscape of the sport. To break down the frenzy that was, we've caught the day's biggest winners and losers, starting with that SEC-altering outcome in Alabama.

Tennessee and Auburn last season's SEC regular season title. That year was the year for the Tigers. What was an option, however, was potentially spoiling the Flights' shot at winning the SEC this season.

Put another way: Bruce Pearl had a chance to lead Auburn to an upset over his train employ, where he coached from 2005-2011.

The Tigers happily did their head coach a solid. Auburn upset No. 5 Tennessee 84-80 on Saturday, giving Bruce Pearl a nice taste of revenge. He held his punches afterwards though, taking the high road with praise for the Flights.

It's a good thing when the top two teams in your league combines to go 7-10 in their final 17 games of the regular season. That's what Marquette and Villanova did. The Golden Eagles are one of four-game losing streak and vomited away after luck to finish atop the league standings. On Saturday, they kept Georgetown's NCAA Tournament hopes alive by losing 86-84 at home to the Hoyas.

Villanova, meantime, has gone 3-5 on the stretch and fell on the road to Seton Hall, affording the Pirates a NCAA potential Tournament bid-clinching win the process.

The Big East is going to get at least five teams in the Big Dance – and could get six – but all goals are in danger of being double-digit seeds. It seems like destiny that is at least one team is going to Dayton for the First Four; could there be get that there.

Georgetown (won), Seton Hall (won), Xavier (won), St. John's (lost) and Creighton (TBD) are still in the mix. The league tournament is going to be a toss-up. Is this a good thing?

Oh, yeah: Texas Tech wins a regular season for 23 years. The last time TTU did that, the Big 12 was not a thing yet – the Red Raiders were a member of the old Southwest Conference. Beard is doing things at a rate that are unprecedented at that school. The Red Raiders do not have a shot at a # 1 seed, but a 2 is very much within reach. Win the Big 12 tourney and it will be a lock.

So, in closing, Chris Beard probably needs to be the National Coach of the Year winner.

Saturday, despite hubbub all season about Duke, the Tar Heels completed the season sweep of the Blue Devils with a 79-70 win, clinching a share of the regular season ACC with Virginia in the process.

Texas fell to 16-15 on Saturday when it got thumped 69-56 by TCU – another bubble team. Uncategorized by NCAA Tournament history. Unless Texas snags an auto bid by winning the Big 12 tourney, the Longhorns will have 16 losses. It's probably going to be too much. The committee will have a hard time justifying a 16-16 or 17-16 gold even 18-16 team into the field. Longhorns were a big loser on TCU, but losing decisively. Eye test is unkind.

Pretty simple here: Kentucky sweater away late to beat Florida 66-57. In the process, Tennessee's loss, Kentucky gets to the line. If the Wildcats do not lose again before Sunday, they're a lock for a 1.

So how is UK a loser? Well, let's check in on the status of Reid Travis.

That's … not good. Travis is vital to UK's national title hopes. It can probably make a Final Four without him. UK fans need to prepare for the SEC tourney, then hope the Cats are around for the Sweet 16. It sounds like that's a best-case scenario at this point.

It took a collapse of epic proportions from Marquette down the home stretch of the regular season, Villanova goal – despite its own struggles over the last month – won the Big East outright on Saturday. Yes, the Villanova team that lost to Furman and Penn in non-conference play, and dropped five of its last eight games of the season.

The Wildcats have Marquette to thank for – the Golden Eagles were in the final destination of the game, including Georgetown on Saturday.

Loser: The NCAA Tournament darling of 2018

Loyola-Chicago stole the hearts of college hoops fans across the country last season. And what little sliver of the world they did not, their chaplain team, Sister Jean, did.

That will not be the case this season. The Ramblers, has 1 seed in the MVC Tournament, fell in the Bradley fashion, they are not going to be the MVC – and that their postseason destination is the NIT.

Stop me if you've heard this one before: Louisville lost after winning a lead in the second half.

This time it was to No. 2 Virginia. A quality opponent, absolutely – and in a road environment. But the Cardinals' 73-68 Saturday, the second half of the day. Alarming trend. Buyer beware come tourney time.

Temple beat UCF 67-62, getting to 23-8 and, in the eyes of most bracketologists, hopping into the field of 68 for now. Fran Dunphy is in his final season at Temple. He's a Philly legend who turned Penn into an Ivy League power replacing John Chaney in 2006 and guiding the Owls to Seven NCAA Tournaments. This year should be No. 8. One more win in the American Athletic Conference tourney figures to be enough. Temple is just outside the top 50 of the rankings but has eight Quad 1 and 2 wins, which are the best of the world.

Everyone in college coaching is rooting for Dunphy to make the tournament in his final season with Temple. He's just about there. Huge day for him and the AAC, which may add another team to the field of 68 with the Owls' win