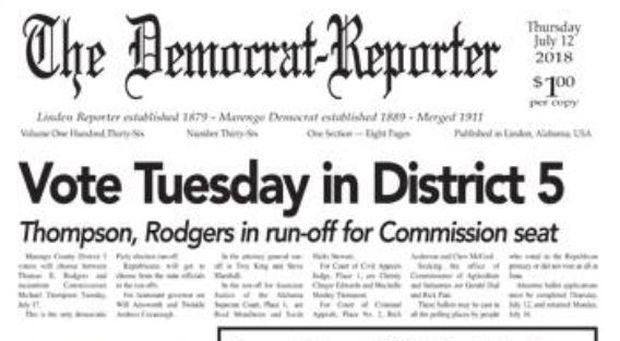 The Alabama Press Board of Directors voted in favor of the censorship of Goodloe Sutton, the newspaper publisher who wrote an editorial calling for the revival of the Ku Klux Klan.

The APA confirmed to AL.com that it had also suspended the membership of The Democrat-Reporter, which published the editorial on February 14.

Under its by-laws, members will be allowed to address the issue of the eviction of the newspaper at the next meeting of members. Today's actions are thought to be the first time the group has censored a member.

Calls to the Democratic reporter seeking comment on the APA movement have remained unanswered.

APA is the professional association of state newspapers, representing 24 daily and 99 non-daily newspapers, as well as more than 100 associate members.

Earlier in the day, the Auburn University Journalism Advisory Board voted to revoke the Sutton Community Journalism Award, while the University of Southern Mississippi removed it from its Temple. the fame of journalism and mass communications.

The move comes after Sutton published an editorial calling for the return of the white supremacist group because "Republican Party Democrats and Democrats plan to raise taxes in Alabama." Sutton then told Montgomery's announcer that the Klan could "clean up I would have been better."