A year ago this frontline worker was fighting for his life. Now he is walking for the first time since Covid-19 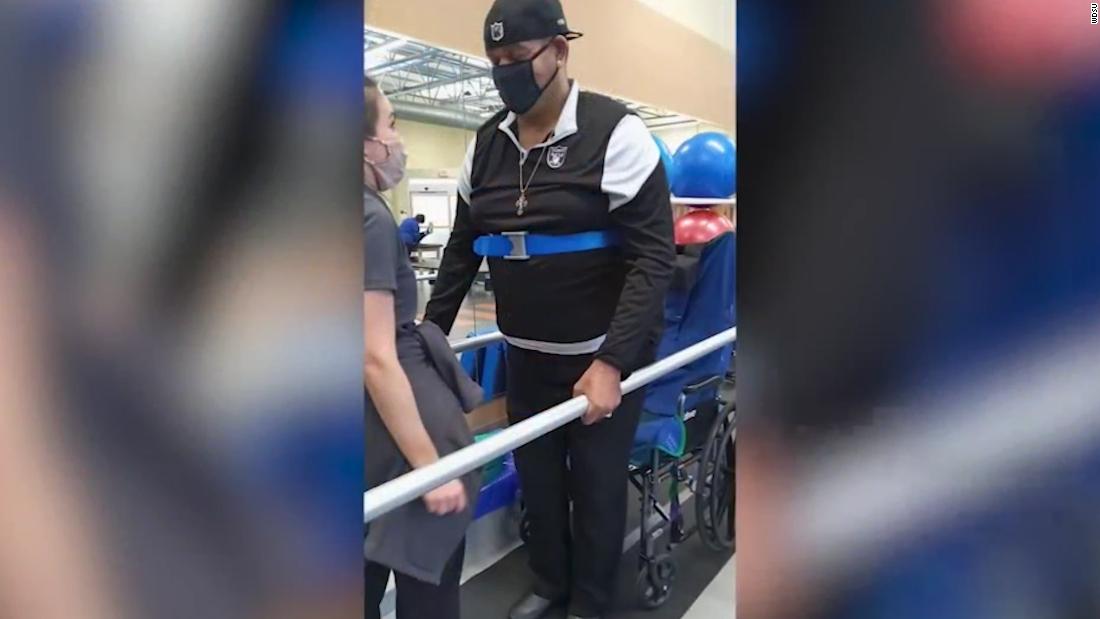 The 53-year-old man, who contracted Covid-19 last March, has lost his ability to stand and walk after spending months in hospital fighting for his life.

“I have nerve damage in some areas of my body and also weakness,” he told CNN on Monday. “To stay in the same position for so long, it took a lot of strength.”

Woullard, a behavioral technician, was working on the front line at St. Charles Parish Hospital in Louisiana when he tested positive.

Before the pandemic, Woullard led an active life playing with his grandchildren, going fishing and cheering on Tulane at football games. But Covid-19 left him with lingering side effects such as fatigue and shortness of breath that limit his daily activities.

Researchers have found that nearly a third of people with mild cases of Covid-19 still struggle with symptoms for as long as nine months after contracting the virus. Healthcare professionals are still working to find out more about this condition they call ‘long Covid’ and why some patients experience persistent symptoms.

His wife, Patricia Cooper-Woullard, told CNN they immediately quarantined themselves at the home where she tried to manage her symptoms. He had a high fever, was hallucinating and was very weak, she said.

After nine days of no improvement, she said she knew something was wrong and took him to the hospital where they both worked.

“He almost passed out when he got into the car,” she said. “When we got to the hospital, within three hours they had him intubated.”

‘I was not going to give up’

Woullard was transferred to Ochsner Medical Center in Kenner, La., Where he spent 38 days in intensive care, according to the hospital. At one point Patricia said he had coded and they weren’t sure if he was going to be successful.

“I just prayed and cried,” she says. “I was not going to abandon my husband.”

Woullard suffered from numerous medical complications due to Covid-19. He had a stroke, a cerebral hemorrhage, his kidneys were failing and he was put on dialysis, according to his wife. He was also placed on a ventilator three different times, according to the hospital

“For the first eight weeks, it was just touch and go, touch and go,” said Patricia, who works as an operating room assistant.

In May, surrounded by cheering hospital staff, Woullard was released from the intensive care unit and transferred to a long-term care facility to begin his rehabilitation. He was released to return home in September but confined to a wheelchair.

Even a year after contracting the virus, his road to recovery continues, but his spirit is not broken. Earlier this month, during physical therapy, Woullard, who is 6 feet 4 inches tall, took her first steps.

“The first time I got up I was like ‘wow, I’m really on my feet,'” he said. “It’s really gratifying at this point to be able to stand up even if it’s only for a few seconds. It really motivated me.”

Patricia was unable to attend the physiotherapy session when he took his first steps due to Covid-19 protocols restricting visitors, but Peter had it recorded so he could show it to her.

“I was ecstatic,” she said of the video. “For a long time, we didn’t even know whether he would be able to walk or not.”

Longtime Raiders fan Woullard continues his recovery with hopes of walking and visiting Las Vegas’ new stadium one day. The couple are currently raising funds to help renovate their bathroom to accommodate their wheelchair.

CNN’s Christina Zdanowicz and Lauren Mascaren contributed to this report.