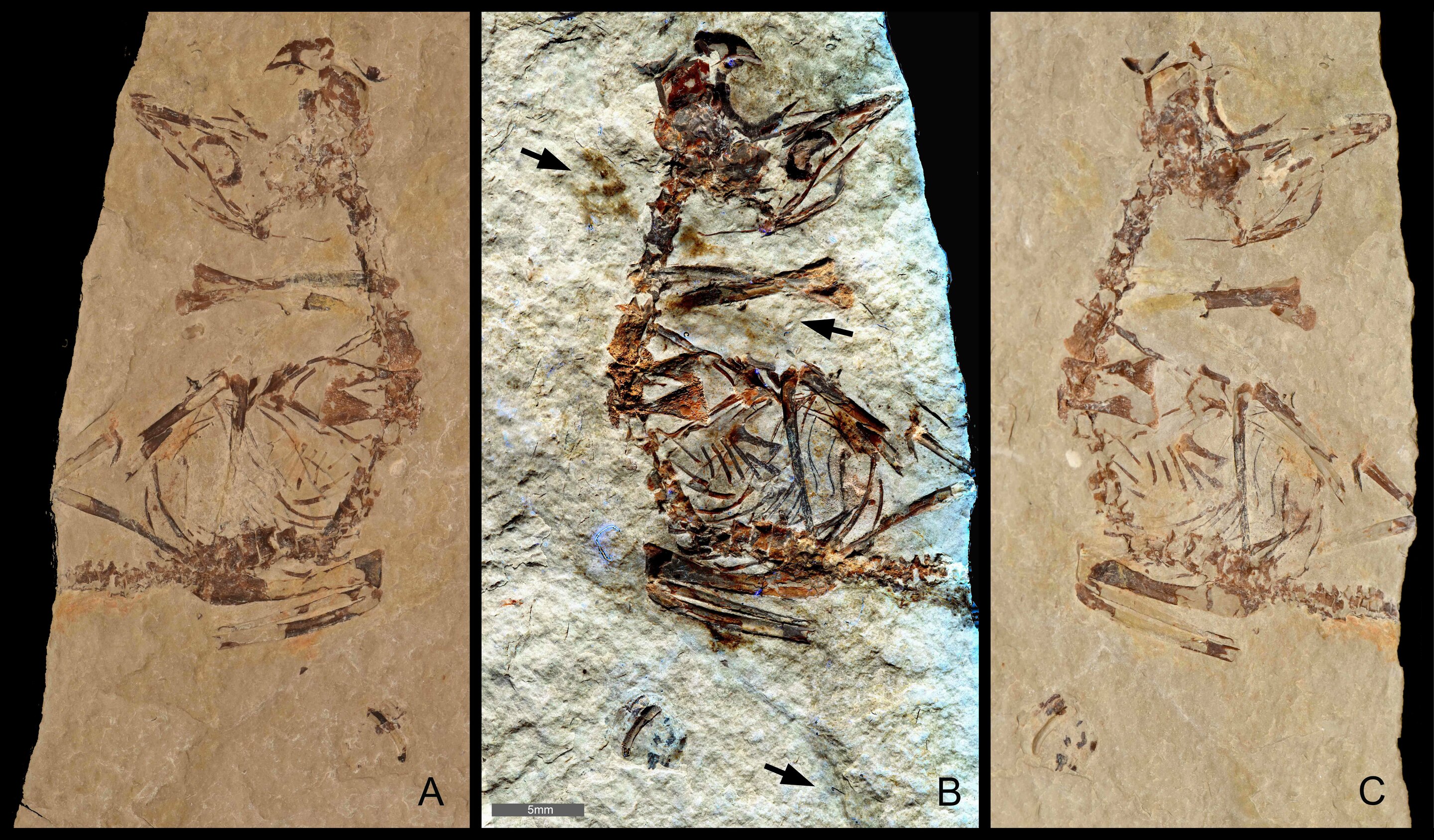 Early Cretaceous fossil deposits dating back about 125 million years from Los Hoyas, Spain, have long been known to produce thousands of petrified fish and reptiles (Figure 1). However, researchers have discovered an extremely rare and almost complete skeleton of a chick. With the help of their own laser imaging technology, Michael Pittman from the Department of Earth Sciences of the University of Hong Kong and Thomas G Kaye of the Foundation for Scientific Advancement in the United States have determined the lifestyle of this bird 3 cm long by determining the feathers until then unknown were preserved in the fossil specimen (Fig 2).

Chickens and ducks are "early", walk and feed a few hours after hatching (Fig. 3). Pigeons and eagles are "nidicolous", remaining in the nest and frequented by their parents. Scientists have a method to determine the type of a given fossil specimen: feather examination. During the hatching of nesting birds, they have developed down and partially developed, and can stay warm and move without help from parents. "Previous studies had been sought, but no trace of feathers on the newborn at Los Hoyas, which meant that his original way of life was a mystery," says Dr. Pittman.

Pittman and Thomas Kaye have brought a new technology to the study of Los Hoyas fossils in the form of a high-powered laser. This made visible very small chemical differences in the fossils by making them fluoresce different colors, thus revealing anatomical details never seen before. They recently met with success with the first discovered fossil feather, which they dissociated from Archeopteryx, recovering the chemical signature of its fossil feather, key element of feather identification which had not been verified for about 150 years.

The new findings on the little bird finally answered the question about his way of life, as he actually had feathers at birth (Fig. 2, 4) and was therefore precocial. The feathers were made of carbon, which had a weak fluorescence under laser-stimulated fluorescence (LSF), but the background matrix shone, which made them stand out in a dark and dramatic silhouette (Fig. 2). "Previous attempts using ultraviolet light and synchrotron beams have failed to detect feathers, highlighting that laser technology alone remains a new tool in paleontology," added Tom Kaye. lead author of the study.

This discovery via new technology shows that some primitive birds have adopted a precocial social reproduction strategy, just like modern birds. Thus, at the time of the dinosaurs, some baby enantiornithine birds had the means to avoid the dangers of Mesozoic life, perhaps by following their parents or by moving around themselves.

"One of the feathers found was of a substantial size and retains the characteristics seen in other newborns, indicating that our newborn had flight feathers that were reasonably well developed at the time of conception. birth, "says Jesús Marugán-Lobón, co-author of Universidad Autónoma de Madrid, Spain (Figs 2B, 4). This discovery, along with other "enlightening" discoveries, enrich our knowledge of ancient life with details that remain in the fossil record and that were never thought possible two decades ago.

Explore further:
The first fossil feather discovered did not belong to the iconic Archeopteryx bird