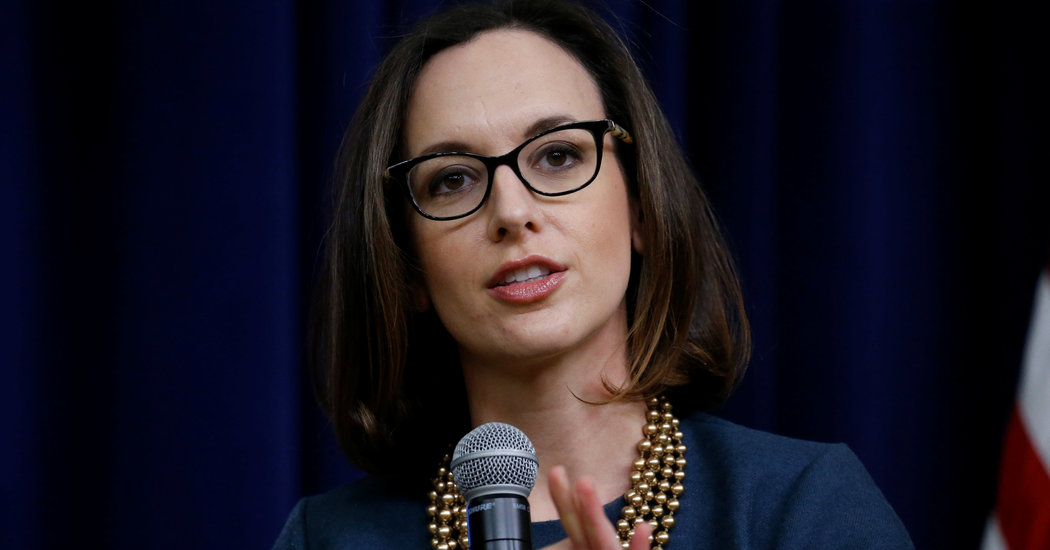 Sarah Isgur Flores, a Republican spokesperson who most recently worked for the Department of Justice, was hired by CNN to contribute to the political coverage of the network, directly propelling a Trump administration official into a leading role. plan for a superior cable network.

Her hiring as a "political editor", not as a commentator, has led to internal and external criticism from CNN for placing a Republican political officer in a position to guide daily political coverage, including information on the 2020 presidential campaign.

Sam Feist, head of CNN's Washington office, said Wednesday that Isgur would spend the first few months getting to know CNN and then "playing a coordinating role" in covering the policy.

"We are delighted that Sarah is coming to CNN," said Feist. "She brings to our team a wealth of experience in government, politics, communications and law."

She previously held the position of Assistant Campaign Director for Carly Fiorina, a Republican who ran for president in the 2016 election.

Ms. Isgur criticized Mr. Trump during the 2016 primaries and also criticized CNN, including complaining that the network excluded Ms. Fiorina from a presidential debate. And years ago, she retweeted a comment from a conservative media outlet who called his new employer the "Clinton News Network".

Feist's memo Wednesday came after a wave of concerns – and in some cases, deep frustration – expressed by network politicians, according to two people close to the complaints. The memo was co-signed by two senior CNN executives, David Chalian and Virginia Moseley.

CNN has already shown its willingness to hire conservative media and corporate employees, arguing that ideological diversity is helpful in ensuring strong coverage. Kaitlan Collins, a White House correspondent for the network's rising star, was hired by The Daily Caller in 2017.

But the network is a frequent target of Mr. Trump and his allies and his journalists have been threatened with physical violence, including a homemade bomb was sent to his Manhattan headquarters last year.

Frank Sesno, a former CNN White House correspondent who currently heads George Washington University's School of Public Affairs and Media, said there has long been a "revolving door" between politics and the media. But political assistants usually have a "period of reflection" between jobs and Isgur's rapid transition is unusual, he added.

He said that CNN should clarify the role of Ms. Isgur. "It's one thing if you can consult a staff member and it's different if they change your copy," he said. "Pretty big difference."

CNN declined to comment Wednesday. The memo from Mr Feist indicated that Ms Isgur would help to "organize and communicate between the information collection, digital TV and television" branches of the network, which has a large-scale operation. ;news.

Ms. Isgur did not respond to an e-mail or telephone request for comment.

George Stephanopoulos was hired as a correspondent for ABC News in 1996 after being one of President Bill Clinton's closest advisers.

His passage from White House Clinton to ABC News – initially as a partisan member of a Sunday political group, which would also report – was raising issues within the network and outside of it. ci at the time. Since then, he has become the main presenter of the network and a host of "Good Morning America".

And the road between political strategist and political expert is well traveled on both sides of the aisle.

After leaving the administration of President George W. Bush, Karl Rove joined Fox News as an analyst. David Axelrod, senior political strategist for President Barack Obama's two campaigns, was hired by NBC News as an analyst in 2013 and has since been transferred to CNN.

More recently, in 2016, CNN announced that it hired Corey Lewandowski as a paid contributor a few days after the dismissal of Mr. Lewandowski as campaign manager for Mr. Trump. He then resigned. The network also broke ties with former Democratic analyst Donna Brazile, after discovering she had shared the questions of a CNN-sponsored event with friends during Hillary Clinton's campaign.

But Ms. Isgur joined the network as a political editor and not a pundit. She leaves an administration in which the president regularly criticizes the media, including CNN.

Mr Sesno said that "the hostile environment" had created an additional perception problem.

"To bring in someone from this administration, it must be clearly stated that this person does not share this disdain for the sector in which they are starting," he said. "And that their true commitment is about journalism, truth and the public."