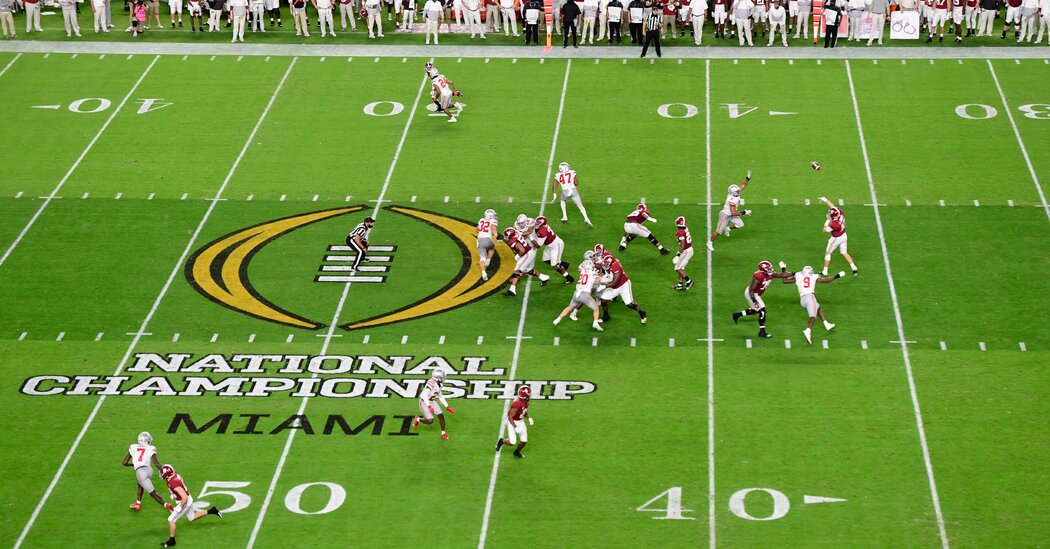 The Electronic Arts College football video game franchise, long beloved by sports fans but shut down indefinitely years ago when it was embroiled in disputes over student-athlete rights, will be relaunched the game creator said on Tuesday.

EA Sports did not announce a timeline for the game’s release, which was last released in 2013, but Cam Weber, a senior executive, said on Tuesday the company was “looking forward to bringing a new game to gamers in the next few years.”

While many colleges stand to gain financially from the return of the game, players, at least for now, will not be paid, nor will their names or likenesses be used. But with the NCAA progressing to new rules for how students can enjoy their fame, specific players could eventually appear in the game, which, breaking with much of its history, shouldn’t carry the image. NCAA brand.

Over the years, no consequence of the war for player rights has resonated more with college football fans than the demise of EA college football games, which have sold tens of millions of copies. Part of their appeal was their realism and the inclusion of the rituals of the sport, including mascots, fight songs, and renderings from famous stadiums.

But the games were ultimately trapped in litigation, and the NCAA and some powerful leagues, including the Big Ten and the Southeastern Conference, gave up on licensing their logos and names for the franchise. In September 2013, EA announced that it was putting the series on hiatus.

At the time, Weber said that “the ongoing legal issues, combined with an increase in questions regarding schools and conferences, left us in a difficult position.

Now EA is building a game around generic players and a deal with the Collegiate Licensing Company, which works with schools to market and sell the rights to their brands. The agreements, the terms of which were not disclosed, will allow developers to use the stadiums, uniforms and logos of more than 100 colleges and universities.

Previous versions of the game often mimicked the appearance and number of players’ shirts without naming them.

For its part, the NCAA is still debating how to allow college athletes to make money from their fame; in January, the association postponed a planned vote on the new rules after the Justice Department raised concerns in the dying days of the Trump administration.

Ramogi Huma, executive director of the National College Players Association, a players’ rights group, said he believed the wave of state proposals to give athletes a chance to make new money manners had contributed to the return of the game.

Huma predicted, however, that the game would have less luster without the distinctive virtual presence of players who play in real life on Saturdays during the season.

“It’s an exciting development, but the game won’t be the same without the players,” Huma said. “The timing reflects that. Without a clear path with the players, nothing happened. In order for EA Sports to have the kind of quality it had before production stopped, you have to have the players in there. Otherwise, the game will be a shell in itself. “

Huma said the NFL Players Association’s group licensing agreement could be an appropriate model for college players, who are currently not unionized. But an agreement like this could prove to be thorny – if not impossible – without a federal name, image or likeness law or NCAA arrangement.

Without a national framework, experts said, soccer players in states with legislation coming into effect in the coming years, such as California and Florida, could be compensated for showing their likeness to video games while players elsewhere would be excluded.

The announcement by EA, one of the biggest game developers, with flagship sports titles around international football and the NFL, comes at a time when online entertainment like gaming has exploded due to the coronavirus.

Video game fans, both casual and die-hard, are spending more time on their phones, computers and consoles, and gamers around the world spent a record $ 175 billion on software alone last year, according to a report. estimate from game analytics company Newzoo.

The release in November of a new generation of gaming consoles, Microsoft’s Xbox Series X and Sony’s PlayStation 5, added to the hype and enthusiasm, although companies and other game hardware manufacturers video have had supply issues related to a pandemic amid huge demand.