Engineers can detect ultra-rare proteins in the blood with the help of a cell phone camera. 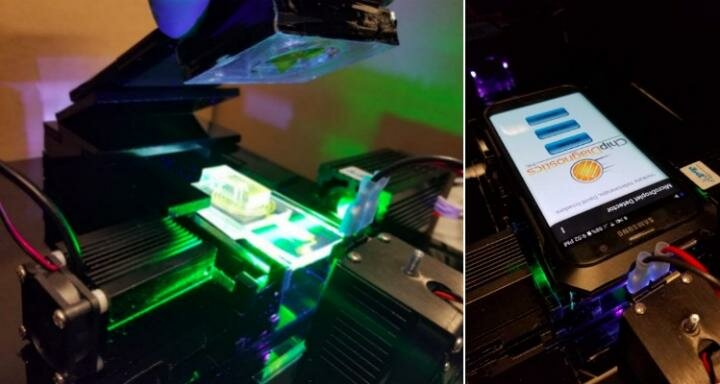 One of the frontiers of medical diagnosis is the race for more sensitive blood tests. The ability to detect extremely rare proteins could make a vital difference for many conditions, such as the early detection of certain cancers or the diagnosis of traumatic brain injury, where the relevant biomarkers only appear in minute amounts. .

Commercial approaches to high-sensitivity protein detection are beginning to be available, but they rely on expensive optics and fluid manipulators, which make them relatively bulky and expensive and limit their use to laboratories.

Knowing that this type of diagnostic system available as an on-site treatment device would be essential for many conditions, particularly traumatic brain injuries, engineers at the University of Pennsylvania have developed a test using components. standard and can detect single proteins with results in minutes, compared to the traditional workflow, which can take days.

Using a standard cell phone camera and a set of stroboscopic LED lights, in combination with the microfluidic droplet generators of their lab, the team developed a system a thousand times more sensitive than the standard protein assay, portable and considerably less expensive than the current State-of-the-art monoprotein tests are coming on the market.

The researchers, led by David Issadore, an assistant professor in the bioengineering department of Penn Engineering, and graduate student Venkata R. Yelleswarapu, demonstrated their system in a study published in the Proceedings of the National Academy of Sciences.

The standard protein detection assay, ELISA, involves the attachment of antibodies to the proteins in question, and then measuring the change in the color of the sample in response to the antibody-related enzymes. This process is quick and easy enough to be integrated with treatment devices, such as home HIV testing, but only works when the protein is in high concentration.

There are currently very few biomarkers for traumatic brain injury because very few protein markers of these lesions cross the blood-brain barrier. Medical researchers have only recently confirmed that such markers can be used for blood tests and, given their extremely low concentrations, this test should be much more sensitive than the standard ELISA matrix.

"A thousand times more sensitive," says Issadore, "that means that if we had a vial of blood with only a few relevant proteins, we can accurately count those proteins, whereas a traditional test could not say more . " The difference between this vial of blood and a vial of proteins not containing protein: if you continue to increase the number of proteins, the traditional test will eventually be able to detect them, but we can quantify the number of proteins at concentrations a thousand times lower. that they can. "

Issadore's approach is to measure one protein at a time, by separating the sample into microdroplets, each containing only one protein, or none at all. The expertise of his laboratory in microfluidics allowed to produce microchips engraved with hundreds of microdroplet generators, all working in parallel.

"Normally, we would have to measure very precisely how much a sample changes color or becomes fluorescent, but we are transforming it here into tens of millions of yes or no questions," says Issadore. "Digitizing this issue lowers the cost of the camera and surrounding fluid processing equipment, but modifies the problem to handle tens of millions of these issues in a reproducible, accurate, inexpensive and portable manner. . "

A standard camera can detect whether or not a microdroplet contains a fluorescent marker-related protein, but the big challenge was to speed up the process. The existing digital droplet detectors align the droplets so that they can be measured one at a time. Such systems are precise, but cumbersome and expensive. Their flow is also limited because of the need to examine millions of droplets one by one.

"Thousand droplets per second, the speed of conventional technologies, are still slow enough if you have to measure 50 million," said Yelleswarapu.

Rather than having a single channel, researchers carry droplets in hundreds of channels that pass simultaneously in front of the camera. The bottleneck, however, is the speed at which a camera can capture the data.

"Conventionally, this would not work, because the exposure time obtained with a conventional camera is such that the signals of two juxtaposed droplets would overlap," Yelleswarapu said. "A cell phone camera takes about a hundred frames per second, which is far too slow for us to resolve these droplets, but you can use that camera if the light source you use to light the droplet a thousand times faster than the number of frames per second of the camera ".

The approach that led the team at Issadore to work consisted in coding this strobe light with a signal that would allow them to distinguish a microdroplet from its neighbors.

"We light the light according to a very specific pattern that is never repeated, a technique we borrowed from radar," said Issadore. "As the signals pass on the screen, they are marked with this barcode, so even if they overlap, we can differentiate them according to which strobe pulse illuminates each drop. . "

The Issadore group has already published publications on markers of traumatic brain injury and is currently pursuing a research project with the Presbyterian Hospital in patients with brain injury. They also have a spin-off company, Chip Diagnostics, based at Pennovation Center, which aims to produce test kits for early diagnosis of cancer and traumatic brain injury.

More information:
Venkata Yelleswarapu et al, Mobile platform for the digital detection of proteins in the form of multiplexed droplets and sub-picograms per milliliter, Proceedings of the National Academy of Sciences (2019). DOI: 10.1073 / pnas.1814110116