Flyers 5, Islanders 2: Not all heroes are sandwiches 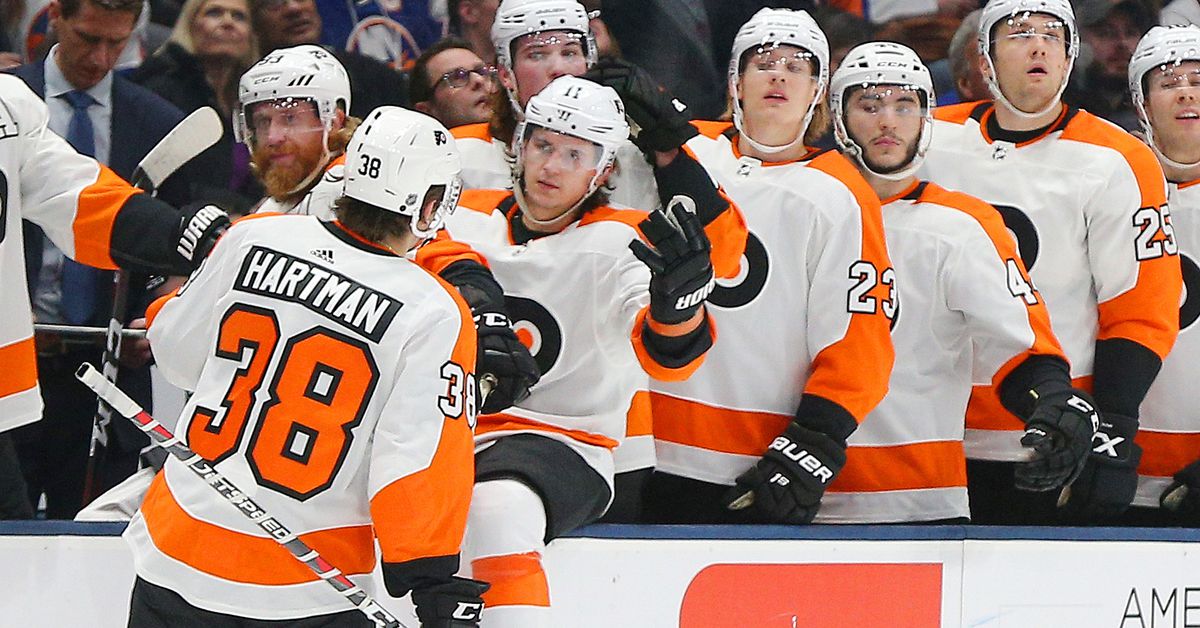 Despite playing an awesome game in the first ten minutes or so, the Flyers managed to clean up their hands as well as they rallied together for a handsome 5-2 win over a rival division. Yeah, that's right, guys, we wiped the floor with them again. It seems that the New York Islanders are literally the only team in the league that has not gotten their Philly Flu vaccinations. Do not blame us-blame anti-vaxx propaganda.

Here is a gif of Jake Voracek clapping sarcastically. It made me feel fuzzy on the inside.

It took a long time for this game to get going. The first several minutes or so oscillated between absolutely unbearable and just plain boring; the team had recorded a single shot on the Flyers got one to the net six minutes in (which allegedly did not even count).

What was clear to me, however, was that the Flyers looked terrible. I mean, Jesus Christ. There is no other way to say it. I am not one to hold back, and I operate on a very strict "no bullshit" policy. I feel like it's possible I've seen the Flyers look worse-I did not miss the opener (you're eight-two see it) -but this is the first time in a while I've felt overcome with existential disappointment. They really did not look good. Passes have not been completed or have been thrown into the wrong places, or stride forward or skates, et cetera. They failed to have strong possession of the puck, leading to preventable odd-man rushes for the Islanders. It was hard to witness.

It was because of this level of play that the forthcoming goal of the Islanders felt predestined. A shot by Scott Mayfield at 6:30 pm deflected off Corban Knight's stick, fooling Brian Elliott pretty easily. I do not know who this guy is. I do not know what to do, and you may be deciding I do not pay attention to hockey if it's not the Flyers. You would be correct, and what about it?

The first power play of the game would be awarded to the Flyers at 11:12 off a tripping penalty on Ryan Pulock for his illegal takedown Michael Raffl. You can not do that, and so to the man-advantage we go. Please imagine fanfare composed of a class of 3rd graders blowing too hard on their plastic recorders.

Would it be redundant of me to say that nothing happened on this power play? You are already supposed to be the case. If you think you did not, think again; You will find the truth in your deepest recesses of your heart.

This power play has been much-maligned in the past, and for good reason, as it is completely God awful. The Flyers never seem to spend too much in the offensive zone and rarely manage to fight aggressive penalty kills. This was no exception to that. They did not look close to being close, and they did not feel that they were looking remotely and prepared to make the go-ahead goal. Time to move on.

Just as I said to myself-and broadcasted to the internet-that the Flyers looked absolutely terrible tonight, and I do mean the literal I said this, Ryan Hartman cleaned his first goal as a Flyer at 15:20 on the rebound. They're determined to make me look foolish.

Although I would not say this goal really changed the level of their play, this certainly makes you feel better. Not for nothing, they looked at a lot of things after that goal in the first half of the game.

I was about to go back to school when, inexplicably, James van Riemsdyk decided to leave me alone. At this point, I could only laugh. They started off the job market, and ended up with two goals and a lead. That's what hockey is all about, you guys. The little things.

The Flyers are the most infuriating and wonderful team in the National Hockey League. I will be taking no constructive criticism at this time.

Jake Voracek got the puck to Sean Couturier on the rush, and it's a release on that guy. Thomas Greiss had no luck on this one, he was just touched Couturier's stick and instantly materialized in the back of the net. The Flyers took a two-goal lead at 1:34.

It seemed that the intermission break did a lot to center the Flyers and refresh their game. Even though they still committed many of the same crimes as in the first period, they definitely had some confidence back and looked like they were speaking the same language at last. They would spend much of that time in their own area, but when they got the offensive opportunities, they jumped on them.

Another example of this would be showcased at 5:35 am when Claude Giroux made an excellent effort to center the puck to where Nolan Patrick's stick was patiently waiting, and he had a pleasantly empty net to shoot into. It's completely bonkers that the Flyers are winning this after they play in the opening frame. I love it with my entire heart.

It would not be a Flyers game against a division rival without the unnecessary dramatics; I was twiddling my thumbs, and they delivered. They always deliver, even if it's not exactly what you ordered.

The initial penalty kill barely had the time to get started before one of our prestigious referees signaled another penalty against the Flyers. Alright, so, that thing I said before about never being worried? I lied, okay? I told goddamn lie. I'm on a mood stabilizer that doubles as a sedative. I have deep-seated anxiety. I crack under pressure, and start crying under every circumstance. Not saying I'm going to cry here-these Flyers will not reduce me to tears, not this time-but I am saying that a 5-on-3 power play is exactly the opposite of what I want here. Sean Couturier took this high-sticking penalty at 6:28, though he did not quite agree with it. Here we go.

The minutes that ensued after Couturier's penalty were some of the most nerve-wracking of my life, or at least my week, possibly my month. The whole area has been fully covered in the Flyers Zone, as the Islanders did not give them much to pounce on the puck and send it down the ice. Some things do go our way, however, and it is a true benefit to the Flyers that this was a weak performance of the Islanders on the power play. Our penalty kill is not so bad anymore, but it's not impenetrable.

Elliott came up with some clutch saves here, but the Islanders had trouble finding the net in general. This was just a combined effort (or lack-thereof, in the case of the Islanders) to allow the Flyers to escape the war zone unscathed, by the skin of their teeth.

The momentum had yet to be moved away from the Islanders, even with the successful kill. The Flyers spent a lot of time in the minutes following the penalties in their own zone. The Islanders team, looking for some retribution after a failed opportunity. Sometimes things suck, guys, get over it. Embrace it.

Throughout the rest of the period, the Flyers ended up stuck in the defensive zone often, where they dragged tired skaters into the Islanders zone and just barely missed some scoring chances. It really did feel like they were about to give up a goal, and I would not have been shocked. I would have welcomed it with a loving embrace, like a sweaty old friend.

However, it did not go that way. In fact it went another way entirely.

An excellent defensive play by Scott Laughton in the Flyers area sprung to the puck to Travis Konecny, quickly developing into a 3-on-1 going to the other end of the ice. Konecny ​​could have passed, but he decided not to, and it was the right choice. What a goddamn shot on that kid. The Flyers added some insulation to their lead at 17:26.

It appeared that Barry Trotz euthanized Thomas Greiss during the second intermission and inconspicuously brought a new goaltender to distract the kids. A new challenger appeared by the name of Christopher Gibson.

I'll jump past the boring nonsense and get right into the meat of the stuff. I know we talk about "bad" and "stupid" and "stupid again." I do not think we give these guys enough credit, folks. They have a hard job. It's very difficult to have eyes and visual processing skills. That's why even though they gave Jake Voracek a five-minute major penalty for, uh, "interference," I do not blame it on their shoulders. I am warm and forgiving person.

It's a hard job, but it's a lot of things that make it so easy.

To me, this does not make me look like a head-hunting hit, and as evidenced by the fact that Johnny Boychuk was holding his shoulder as he was down on the ice, it did not appear to catch him there, either. It looked more like Voracek was bracing himself for a boychuk at a hard angle. A penalty? Maybe. A major penalty, absolutely not. But whatever. They do not pay me to wear those stripes, I guess.

Josh Bailey took a run at Voracek as a revenge for the hit. Bailey's minor and Voracek's major at 5:41 sent the game to a 4-on-4, then following three minutes of an Islanders major power play.

Both teams got plenty of chances during the stretch of 4-on-4 play, but nothing could be generated before the Islanders power play. Once again, the Flyers killer penalty came up huge here, as they've had to the entire game. They killed this off and looked pretty good doing it.

As was anticipated, the Islanders were still not happy with Jake Voracek for taking Boychuk down, and he would spend the rest of the game paying for it. Scott Mayfield, the lone goal-scorer for the first time, took a run at Voracek's first chance. This did not really have anything to do with the tunnel on a ten-minute game and send it to the penalty kill at 10:55. What did you learn, Scotty?

I do not really need to say that nothing has done on the power play. It really does not need to be said. At this point, I'm in the mood for the Flyers power play, and receive nothing in return. It's a good relationship we have, very mutual.

Yet another Islanders player got up in Voracek's business with a minute left on the power play, and really, is not it just a little ridiculous by now? Fellas, take it easy. Pop to Tylenol PM. Talk to your doctor to see if Lunesta is right for you.

Jake's retaliation to Leo Komarov's revenge shoving earned the two of them matching roughing minors at 11:56. The Flyers would be able to stay in touch with the rest of the world, and then they'd like to skate and go right to 4-on-4 for another 60 seconds. A lot of this recap was just doing me uncomplicated and also infuriatingly difficult simple math. I'm thinking I should have finished high school.

No one would score on the power play and the following stretch of 4-on-4 hockey, and it would be fairly easy to come out of it. It's pretty improbable to come back from this kind of deficit this late in the game, but hey, the Flyers are somehow winning this, so anything can happen, I guess. Or not.

The Islanders scored one last goal at 16:28, with Nick Leddy putting one in the rebound. Good for you guys, huh? Go get yourselves some frozen yogurt after this. With all the toppings that you want, fellas, you deserve it.