Giuse's Buster Posey will not be played until March 1st 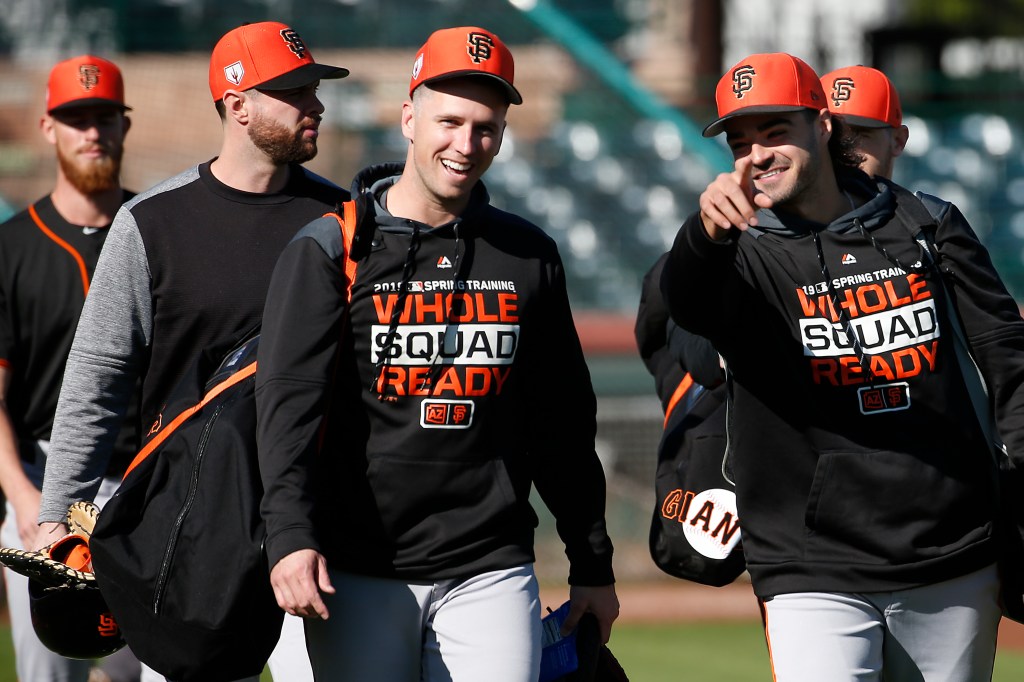 SCOTTSDALE, Arizona – A player's ability to crush 100km / h fast balls is hardly a predictor of success, but when games are still just days away, groundstroke testing remains a hot topic during spring training.

A group of Giants hitters took a particularly impressive start.

The Austin Slater, Cameron Maybin and Mac Williamson championships formed a quartet with receiver Aramis Garcia during Wednesday's practice session and sprinkled home runs at the left foot of the stadium at Scottsdale Stadium.

The distances players reach during batting trials are not particularly important, but the quality of the swings they produce is something the coaches keep a close eye on. And until now, all four have distinguished themselves for different reasons.

Slater revised his momentum and throws the ball higher and further, a critical development for a player who struggled to make throws last season. The manager, Bruce Bochy, said that Slater was trying to avoid "choking the ball" and that the first changes he had made to his momentum should give him a better opportunity to hit for the power.

At a live session on Wednesday, Slater crashed an offer from right-hander Trevor Gott over the left center field fence. This was the first and remains the only home training in two days of camp.

Maybin also reworked his momentum during the off season, spending three to four days a month in California with private strikes instructor Craig Wallenbrock. After signing a minor league deal with a guest not on the spring training line-up with the Giants, Maybin said he was not focused on raising the ball, but was determined to make a stronger contact.

Over the past few days, Maybin has pushed several bullets into the outdoor fields, but he also seems to have less and less ground as he polishes his new approach.

Williamson stands out by the absolute power he brings, but also by the fact that he is not able to play in the minor leagues. If Williamson is not part of the 25-player lineup, the Giants must designate him for the assignment.

The teammate said he was completely cured of a concussion that cost him a good part of last season and helped prove it by making a lot of difficult contacts during batting practice. Williamson still uses the same swing mechanics he brought to spring training last year after working with private strike instructor Doug Latta.

The last member of the quartet, Garcia, received rave reviews from baseball president Farhan Zaidi, who admitted he did not know much about the receiver until he arrived in San Francisco in November. Although the Giants recruited veterans Steven Vogt, Cameron Rupp and Rene Rivera to play the match behind Buster Posey, Garcia is in the best form of the group and impressed everyone around the camp with his first shots of the spring.

Posey is waiting to catch

Bochy said Wednesday that Posey continued to progress well as he was recovering from hip surgery in August. Although the Giants' catcher did not experience any setbacks during his practice this spring, the team will take a cautious approach and will likely not have Posey's attack in a Cactus League match before 1 January. March around.

Posey could play first base or serve as a designated hitter before the end of February, but do not expect much in game training during the first week of games.

Right-handed Chris Stratton will take the ball on the first day of the Angels Cactus League at Tempe Diablo Stadium. Bochy said the left-handed Ty Blach would support Stratton as the first lifter. The rest of the rotation for the first week is as follows:

Wednesday against the Royals: Jeff Samardzija followed by Andrew Suárez

Samardzija faced the batters Tuesday for the first time since the start of his re-education for Double-A Richmond in Bowie, Maryland last August. Samardzija stated that he felt no pain and that he no longer tried to compensate for the pain in his shoulder by adjusting his mechanics.

Johnny Cueto played for the first time on Monday, marking a milestone in his recovery from an operation at Tommy John. Cueto was happy to be back on the field and still hopes to join the Giants sometime before the end of the regular season.

The Giants coach said former prospect Tyler Beede added a new timing mechanism to his performance that helped him regain control and regain confidence in his abilities. It is not certain that the Giants train Beede as a starter or reliever this spring, but he went from rotation to the market last summer.

According to Bochy, Ray Black and Melvin Adon, right-handed bulls, both touched the ball 100 miles to the hour with their fastball and added that Adon could be on the fast track for the big leagues he's building an impressive season in Arizona Fall League.

Day off for Sandoval

Pablo Sandoval modified an oblique during an impressive Tuesday training session at batting and took a break Wednesday. The injury is not considered serious and Sandoval could be back on the pitch on Thursday.