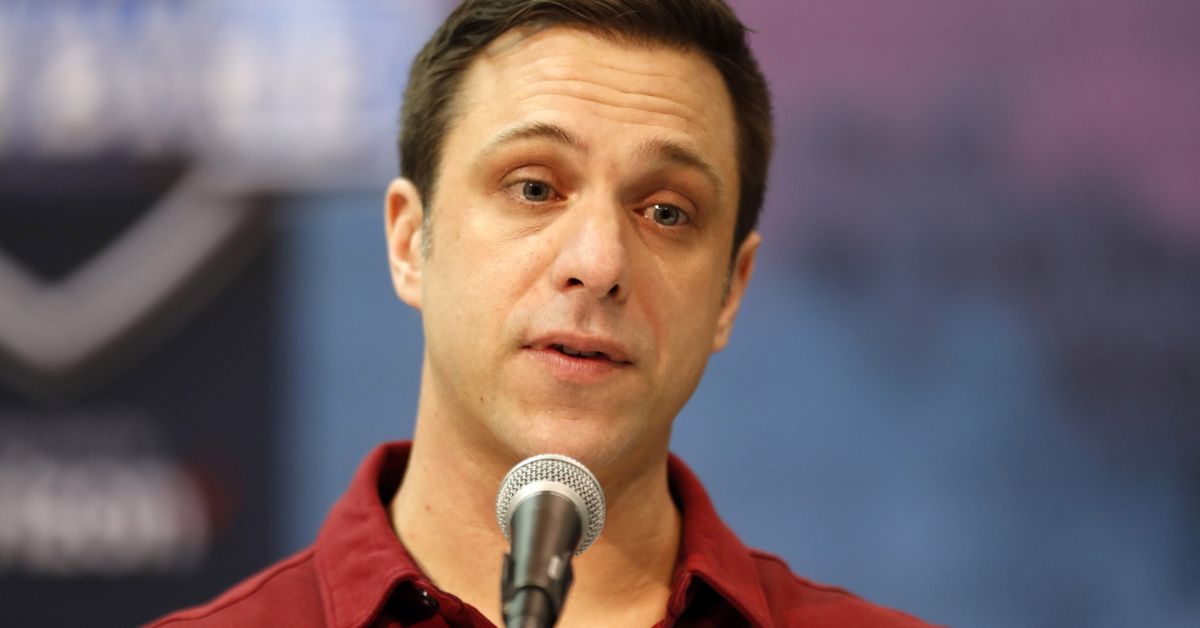 Kansas City Chiefs Chief Executive Brett Veach took the NFL Scouting Combine podium at Indianapolis on Thursday to speak extensively to the press on a variety of topics. Here are some takeaways:

Unsurprisingly, reporters asked Veach many questions about high school, and by answering them, he covered as much ground as one in three security

As you can imagine, it all started with a question about chief safety, Eric Berry, and Veach's response was remarkably devoid of commitment.

"Coming back to last year, no one was more frustrated than Eric with the way all of this had happened," Veach said. "But listen, we're comfortable with our players. We have a plan in place for these guys and no one is more enthusiastic than Eric to come back to this case. "

When asked if cornerback Charvarius Ward would be a starter in 2019, Veach said his team would be "aggressive in this zone" during the free placement and draft, but left the door open for Ward.

"I think the recording that he was able to put at the end of the season was certainly encouraging," he said. "Now, look … there was not a lot of work. These offensive coordinators have a lot of talent, they find ways to expose people and find trends and weaknesses. You can certainly say that there were not many cassettes to exhibit yet. But I think he's got a unique skill set. He's tall, he's long, he's fast, he's athletic, he's tough.

"It was really encouraging to see him arrive early and contribute to the special teams," continued Veach. "He's a very good indicator with these young guys who may not start right away; their ability to get in right away and be part of the special teams is usually a good indicator. I think we are excited about the opportunity with him. And I know it was early [in] This process with our new defensive staff, but he was one of the first guys they mentioned, so it was certainly encouraging. We are excited for him. "

A journalist wanted to know if Veach would seek to acquire college half-corners in order to convert them into security rules.

"Yes, I think you're starting to see a trend of the corners and projecting them as security," he said. "We talked a lot with a few players in this class about their corner skills. We can move on to security. It's a passing league and everyone is trying to create asymmetries in high school. You can not have enough blankets and when you think you have enough corners, you have to start putting them safe. But I certainly think you're starting to see this trend of guys projecting security angles and getting as many cover guys as possible in the field. "

The media also questioned Veach on the difficulty of making a decision when adding a play to high school because passers-on have such a premium in the NFL.

"I would say I do not think you ever want to classify yourself," Veach replied. "Listen, if you have a mat that you think is a top-level player at a corner or a security, you respect the integrity of the table and you go in that direction. You can certainly have some leeway if the guys are rated the same way – you can say maybe go around here, go to the security here if you have similar notes.

"But I do not think you ever want to jeopardize the integrity of your board and take, for example, a turn in the third or fourth round on a first or second round pass. I think if you stick to that, you'll be successful. "

Veach also spoke of the consistency of the process – associated with some flexibility – when asked about the balancing of the ribbon versus the measurable elements of the combination of appearances.

"My philosophy is that I think that during your first rounds, you just have to maintain consistency, and I think when you get into the latest series of the project, I think sometimes you just let the tape talk about it. itself, "he said. "If a guy can play, he can play. That's not to say that you're not going to break these trends sooner, but I think in general you want to maintain the standards you've defined: a certain size, a certain weight, a certain speed, and so on. Every year is different. There is always a single player who will somehow break this philosophy. "

Veach spoke more generally about defense in the project – both last year and this year.

Veach said the team was satisfied with the recruits' contributions during the all-defense draft last season.

"We're really excited about these guys and I think all of these guys have really been able to get in right now and contribute. Breeland Speaks played a lot of snaps, Derrick Nnadi was a starter for us. Even taking into account players like Charvarius Ward, whom we added during the breaking of the wire of derogation, the day before the beginning of the season. He played. Dorian O'Daniel has seen a lot of clichés. Armani Watts was coming. Tremon Smith did a lot in the special teams. So really, all these guys had the chance to contribute [and] to wet your feet. We are looking forward to seeing these guys move on to the next step. "

Veach said he saw a lot of defensive depth in the 2019 project.

"It's a really intriguing class," said Veach. "I think this has been mentioned many times in the early days: this year's defensive line is really deep. There are a lot of players – the smugglers, the inner runners, the runners, there is a lot of depth in this position. I certainly think that there will be many names of these defensive players called early.

"But here, there is a delicate depth in the class and we are delighted to have a first round pick, two second round picks and a third round pick," he added. "This is the first time, I think, [that] We have had one, two and three years – with the transactions Alex Smith, Jeremy Maclin and Patrick Mahomes. We are simply delighted to be able to work with many choices. "

Veach said he had a good idea of ​​the type of players that would like the new defensive coordinator Steve Spagnuolo.

"Big and long and athletic, like all the coordinators, is not it?" He asked. "I mean, guys with a high engine. The guys who are smart, passionate and love the game. It's consistent throughout the league. I certainly think Steve will definitely put more emphasis on size and length. "

The media then wanted to know some of the best offensive players available in this year's project.

"Yes, he's a good player," Veach said. "He is a hard and physical runner, and I think he would fit well with our half-body team. We certainly like the biggest backs. I think you know, in the Kansas City area, that I have a soft spot for 220-pound backs that can run, catch and block. He corresponds to this bill, so he is an intriguing player. "

A reporter then asked about running back Alabama Josh Jacobs.

"Yes, it's explosive," Veach replied. "The only thing about Josh Jacobs is that you do not want to be a defender on the open field when he has the ball in his hands, not the biggest player, not the fastest, but I think his ability to generate yards after contact is really amazing.For a little guy, he has a very strong and compact build.You feel it on contact.It is an exciting player to watch.But the other half-scorer – Damien Harris – He's really good too – he's got a little more speed – again, I think one of those two players would be a benefit to any team. "

Then Veach was asked about the Damien he already has on his list, the one named Williams. Would he be able to continue carrying the charge for the hasty attack of the leaders?

"Yes, he certainly showed it at the end of last year," Veach said. "It was a guy we could acquire during the off season last year. He entered the preseason and showed lightning. He just needed an opportunity. And when the opportunity came up, he sort of grabbed and ran with it. That's why we have extended it. He has always been a talented player. He can run, catch and block. He can really do everything. He was great in the special teams. I would certainly say that starting the off-season – and getting into the 2019 season – is a loss for Damien. "

Surprisingly, no one wanted to know Veach's opinion of Kyler Murray's size, weight, or size – but how could they avoid asking questions about Missouri quarterback Drew Lock?

"I can somehow call my neighbor because I live in Lee's Summit," Veach said. "But no, he's an extremely talented player. Good family. I know his dad, [and] I know a little son. I think he has a very intriguing talent in the arm. I think that he has a great ad-lib ability, which you definitely need in this league. Arm strength and ad-lib capability are a good starting point. He has both of these qualities and I'm sure it will not be long to hear his name being called on the night of the repechage. "

Other notes from Veach's Thursday appearance:

Are you watching AAF? "I'm definitely doing it.The good thing about the FAA is that these guys went through this whole process here, we have a database of these types at the combine, some rough draft notes, some notes pro, so there is definitely a handful of guys that we liked and maybe for one reason or another, the depth of the list or the lack of space, we have not been able to & # 39; 39, acquire these guys.There are a lot of players on the field, and again, there are probably a handful of these guys who had not been with a team of AAF, could already to be part of our 90-player list I think it's a good opportunity for us to see these guys in a competitive environment and see where they are and how they've developed, we can get their film now on a weekly basis and we're going to attack a bit like we do for the CFL and smaller colleges. We'll have guys dedicated to that and continue to look for ways to keep finding players and keep adding talent to our team. "

What did you see in the offensive lineman Justin Senior? "Yes, he had stubborn injuries, but he was a guy we liked to get out of the state of Mississippi. He is a sporty player with good feet, [and] good hands. We will see. He still has a long way to go because he is out; he spent a little time here. There are certainly a lot of skills to work with and we'll see what we can do with it. "

Are you a different GM after your team is AFC # 1 seed? "I think I've been very lucky to have a lot of great people around me – and I do not think anything has ever been so big just because I've always been with people." Great people, and they make me somehow look smart. When you have a Hall of Fame coach and a most valuable League player at the quarterback, you feel good. It's a good thing. "