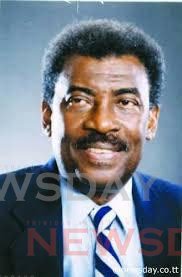 In a Facebook post, former Education Minister Dr Tim Gopeesingh said the disease had slowed Bartholomew “in recent years” but remained one of the world’s greatest intellectuals, academics, scientists , officials, doctors and patriots of this country.

“He was the perfect example of what a doctor should be – highly skilled, brilliant, very knowledgeable, thorough and thorough with every medical case. But what stood out even more was his formidable humanity. During his rounds in the hospital, his behavior at the bedside was particularly exemplary, as he never failed to go beyond the call to analyze the most vague medical problems of the patients, treating each one under his care. with unparalleled compassion and respect.

Dr Ayanna Sebro, technical director of the National AIDS Coordinating Committee, said she was still dealing with the loss.

“I know these things happen and death is a part of life, but I didn’t expect to lose it just yet.

She told Sunday Newsday that she had interacted with him since 2004 and worked with him directly for five years at the TT Medical Research Foundation, which he founded.

When asked to describe the type of man Bartholomew was, she replied, “He was epic.”

She said he was a mentor who shaped many people who were known to be “very good doctors” and who influenced their careers. She said he was tough on her and the others, but he also loved and tried his best to bring out their full potential.

“He belongs to the generation of people like Dr Violet Duke, Dr Waveney Charles, whom we have also lost. It’s a generation of clinicians who really shaped medicine in Trinidad and Tobago and losing them leaves a little void. As young doctors it is important that we mobilize ourselves to try and fill very large shoes. “

According to an article from St Mary’s College Past Students’ Union and the Niherst website, he received an honors degree in gastroenterology in 1964 and an MD from the National University of Ireland in 1965.

In 1967 he was recruited from the Royal Victoria Hospital of McGill University to inaugurate UWI’s first medical school, and in 1977 he became UWI’s first Trinidadian medical professor.

He has served as an International Bioethics Advisor, External Examiner for the University of Ibadan, Nigeria, and Visiting Clinical Professor at the Liver Unit, University of Miami and Royal Victoria Hospital, McGill University. .

“He has over 70 publications in scientific journals and is the author of chapters in eight medical textbooks … He also wrote four religious books on Mariology, led the restoration of four churches in TT, and designed all of them. the stained glass windows. from the Cathedral of the Immaculate Conception and the Church of Saint-François de Belmont.