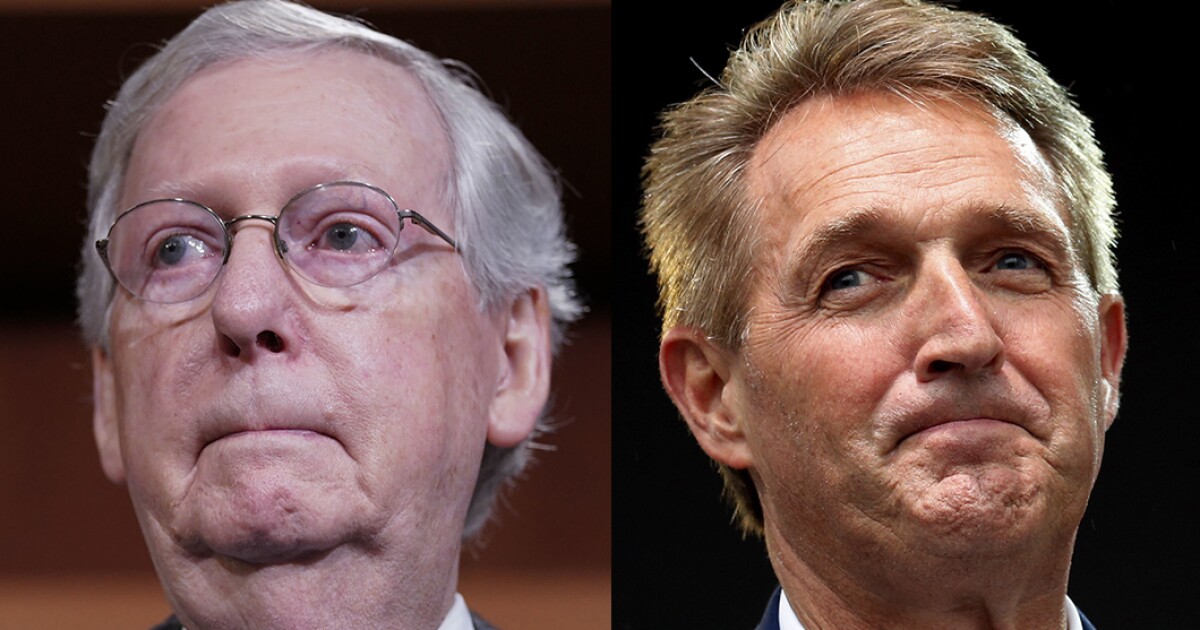 SMajority Major Mitch McConnell, R-Ky., Is harming the Conservative cause by taking a hard line against tactics by retiring Senator Jeff Flake.

Flake, an Arizona Republican who opposes President Trump, says he will vote against all pending judicial candidates, unless McConnell allows the Senate vote on a bill to protect the investigation led by the special advocate Robert Mueller on Russia. Flake is the main sponsor of the Senate bill, along with Democrats Chris Coons of Delaware and Cory Booker of New Jersey.

Flake holds the key vote in the Senate Judiciary Committee, in which 25 of President Trump's judicial candidates are waiting for a vote. Without his support, no candidate will oppose the committee as a whole. Democrats will not be able to come to the full Senate. 34 other candidates have passed the committee but are still waiting for confirmation of a full Senate where Republicans hold a slim 51-49 advantage.

McConnell has repeatedly stated that his goal is to confirm as many as possible of all Trump's judicial candidates. Outside of conservative groups, they urged the Senate to confirm numerous judicial appointments before the Congress finally resumes at the end of December. Flake's position is a serious obstacle to this agenda.

McConnell says the bill, called the "Special Law on the Independence and Integrity of Legal Counsel," is a "unnecessary pointless solution to the search for a problem," while 39; other Republicans argue that it is unconstitutional. But as Flake leaves the Senate, McConnell can only discipline the Arizonan for his intransigence. Meanwhile, several Democrats also threaten to block the spending bill "must pass" if the Mueller Protect Bill is not allowed to vote.

Flake and his allies hold all the pressure tactics here. If McConnell wants to confirm the judges this year (thus freeing up speaking time next year for other priorities), let alone promoting other legislation, a Conservative leader should hold a preparatory working session while Republicans still control both houses of Congress. The only apparent choice is to meet Flake's request.

The reality is that it will cost McConnell, the Republicans, and Trump almost nothing to comply with Flake. It is not certain that the protect-Mueller bill will be passed by the Senate if a vote is allowed – and even if it is, it will not matter. It is absolutely not possible that incumbent Speaker Paul Ryan, with a Republican majority of 23 seats for a month, authorizes the House to pass Flake's bill. Unlike the narrowly divided Senate, no single person or group in the House has enough weight to force a vote.

(And, of course, Trump holds the veto right anyway, so it will never become law.)

From the point of view of pure practical politics, McConnell should therefore submit to Flake's demands. It does not matter if the bill is necessary, wise or constitutional. It will not go to the House or will not be legalized, period.

So why not allow debate and vote that Flake asks, then move on? It is better to finish the rest of the Senate business, particularly the candidates for the judiciary, than to protect Trump from what would at worst amount to a symbolic reprimand if the bill were passed.

Symbolic reprimands do not have the force of law. But unconfirmed conservative candidates for the judiciary will leave too many federal courts under the control of too many Liberal judges – and interpret existing laws in a manner that is odious to McConnell and detrimental to good government.

This is one of the situations in which a snowflake can not simply be cleaned.