At the end of March, the journal Smart Materials and Structures published an article signed by engineers from NASA and the Massachusetts Institute of Technology (MIT) that talks about a changing-shape airplane wing. A technology that, according to its creators, could revolutionize the flight.

5 photos
The technology is called MADCAT, short for Mission Aerostructure Technology Composite Digital Composites. Made up of hundreds of tiny triangular components, the wing obtained is, according to its creators, as rigid as a polymer similar to rubber and as light and sparse as an airgel.

The pieces of material – whether metal or composite, but this time in carbon fiber – were bonded to form a lattice frame covered with a thin layer of polymer.

This results in a wing that can change shape to control the roll or pitch of the aircraft, without using components such as fins. The change of shape is not done by means of motors or cables – although, according to the engineers, these can be added – but using modifications of the aerodynamic load of the wing.

"We are able to gain efficiency by adapting the shape to the loads under different angles of attack", According to MIT News, Nicholas Cramer, research engineer at NASA Ames and lead author of the newspaper.

"We are able to produce exactly the same behavior that you would have actively, but we did it passively."

A prototype of the hand-assembled wing has already been tested in the NASA wind tunnel at the Langley Research Center, where "He even realized a little better than expected."

The wing is currently in the research stages, but if it succeeds, the technology could extend well beyond aviation and become the solution of choice for wind turbines, bridges or space structures .

More details on the project are available in the video below. 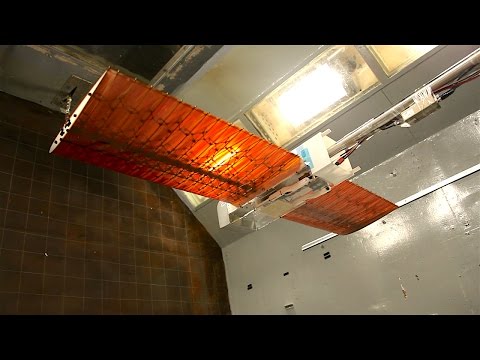