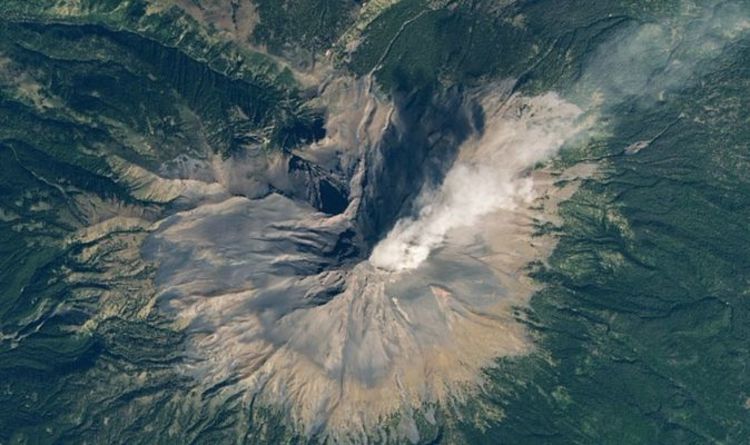 NASA provided a spectacular view of the steam-blowing volcano known as Popocatépetl, or more colloquially Popo. The generally calm volcano was spotted by NASA’s Landsat satellite leaking from its source. The NASA image was taken on January 2 and shows the plume of steam rising into the air.

On January 6, the volcano then erupted, throwing ash more than 6,000 meters into the air.

Residents have now been warned to stay away from the volcano.

NASA said on its Earth Observatory website: “On January 2, 2021, the Operational Land Imager (OLI) on Landsat 8 captured this image of a rising plume of Popocatépetl (nicknamed Popo).

“On January 6, the Washington Volcanic Ash Advisory Center (VAAC) reported a plume of volcanic ash that rose approximately 6,400 meters (21,000 feet) above the volcano.

“The Mexican National Center for Disaster Reduction (CENAPRED), which constantly monitors Popo, has warned people not to approach the volcano or its crater due to falling ash and rock fragments.

“Ash falls were blown downwind to the town of Puebla, located about 45 kilometers (30 miles) from the volcano.”

At 5,426 meters high, Popo, which is about 70 km from the capital Mexico City, is the second largest volcano in North America.

More than 20 million people live in the city and would be at risk if the volcano were to have a major eruption.

However, experts say it does not pose a huge threat to locals due to its generally dormant nature.

NASA said: “Most eruptions over the past 600 years have been relatively mild.”

But the volcano has been running out of steam since 2005.

NASA added: “The glacier-covered stratovolcano has been erupting since January 2005, with daily low-intensity emissions of gas, vapor and ash.”

In 2018, Popo erupted for the first time since 2000 when ash was propelled 3,000 meters into the sky. Since then there have been several eruptions.