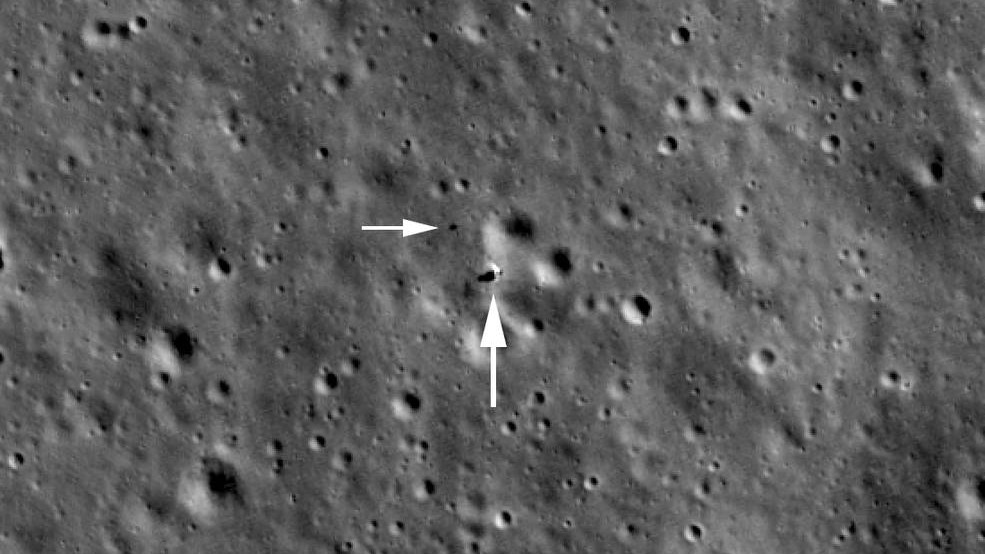 China's latest robotic expedition on the lunar surface is overseen by an American spacecraft orbiting the moon.

NASA has just released the image, as of February 1 st. It was created while its lunar reconnaissance orbiter was 82 kilometers (50 miles) above the Chinese Chang'e 4 expedition that had landed and deployed a small rover, Yutu-2.

It's as close as it can reasonably be to this particular place. For an idea of ​​the scale, Yutu-2 is well 29 meters from the lander in the picture:

Both countries have considered using the orbiter's cameras to identify the landing site in advance, moving closer to the US official ban on direct cooperation between their space agencies. NASA Administrator Jim Bridenstine, however, told Quartz that the United States and China are sharing scientific data from their respective lunar expeditions to advance the cause of science.

This mission, China's fourth voyage to the moon, aims to collect data in the southern polar region, where the presence of water ice is generating renewed interest in robot shipments and can -be human until the next Earth's next neighbor. The American spacecraft that took these new images was part of the global team that helped discover this water and has been watching the moon since it arrived in 2009.

Chang'e 4 became the first robotic probe to land on the other side of the moon when it arrived on January 3rd. NASA researchers expect it to provide important information on relatively unexplored geology. After deploying his rover, the lander completed an experiment in space farming that ended, which was familiar to amateur horticulturists, to death.

The United States hopes to return its own robotic explorers to the lunar surface through a new program that will engage private companies to build spacecraft to carry sensors developed by NASA scientists. Thomas Zurbuchen, who heads the space agency's scientific director, said this week he expects the first mission to leave this year.

In the meantime, if aerial shots make you look closer, China has released this video of the rover heading for the lunar surface for the first time, captured by the LG: