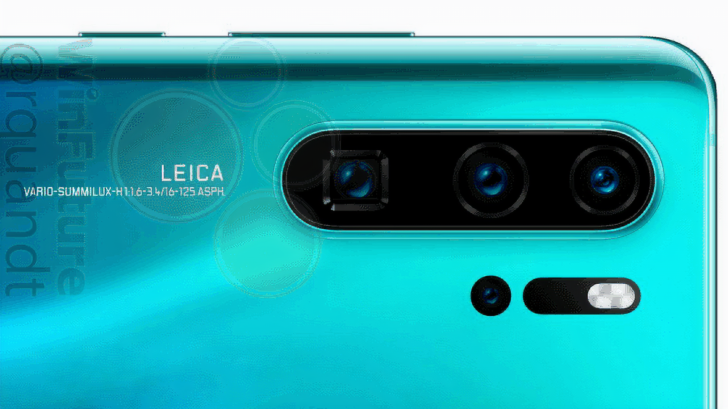 Even if Huawei is navigating in a difficult legal context, the development of new products does not seem to slow it down. A new set of renditions of the upcoming flagship brands P30 and P30 Pro has been introduced to WinFuture and suggests new features such as 10x optical zoom and variable aperture.

The renderings show us three color options for each device: peacock blue, darker aquamarine and greyish black. The drop-shaped notch and the triple camera layout are consistent with the P30's renders we saw in January, though they do not show us the sides or the bottom of the camera.

Renders of the Huawei P30 Pro

More interestingly, the rear of the P30 Pro rendering shows a third square-shaped camera, which resembles Oppo's 10x optical zoom lens recently presented to the MWC. This camera technology comes from Corephotonics, recently acquired by Samsung. Having a 10x zoom will be a nice upgrade to the Mate 20 Pro's 3x optical zoom.

These phones did not start at the MWC, as we had planned, but now we know they will do it on March 26th. More competition in the camera segment is always welcome, but I can not help feeling a bit of sadness knowing that these images will probably not be sent to the United States soon.

Trump is not the only one to make news in Vietnam – the Huawei P30 Pro was sighted in the open air, perhaps in Saigon (now Ho Chi Minh City). In a series of images that have leaked, you can see the distinctive configuration of the camera's camera and even the square lens, which is probably a 10x zoom.