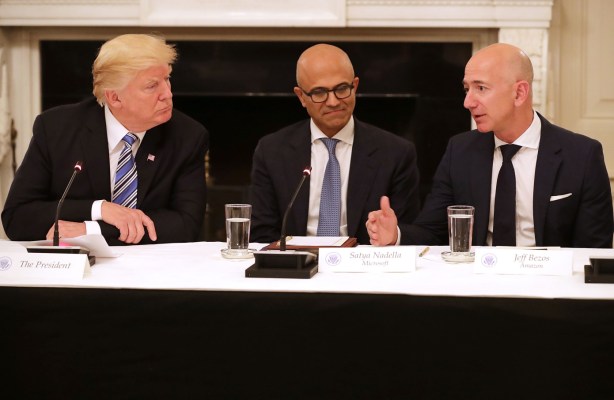 Senior technical executives from Google, Microsoft, Qualcomm and Oracle will visit the White House next Thursday to discuss "bold and transformational ideas" focused on US innovation.

The meeting, organized as a "round table" by the Wall Street Journal, should cover a wide range of emerging technology topics, from 5G to IA to quantum computing, which "can help ensure the American leadership in the industries of the future ". according to an email from the White House.

The meeting follows longstanding tensions between the Trump administration and many large high-tech companies over political decisions ranging from social issues such as LGBTQ rights and immigration to commercial rates.

Amazon is particularly absent, he participated in the first meetings of the White House, but has more and more difficulties with the administration that Trump specifically targeted the Washington Post's owner, Jeff Bezos. Twitter, Facebook and Google were also caught off guard by the president over accusations of bias and media bans.

Alongside CEOs such as Satya Nadella and Sundar Pichai (who is also due to testify before the House a day earlier), Carnegie Mellon University President Farnam Jahanian and Steve Schwarzman of Blackstone private equity firm Blackstone will also be in attendance.