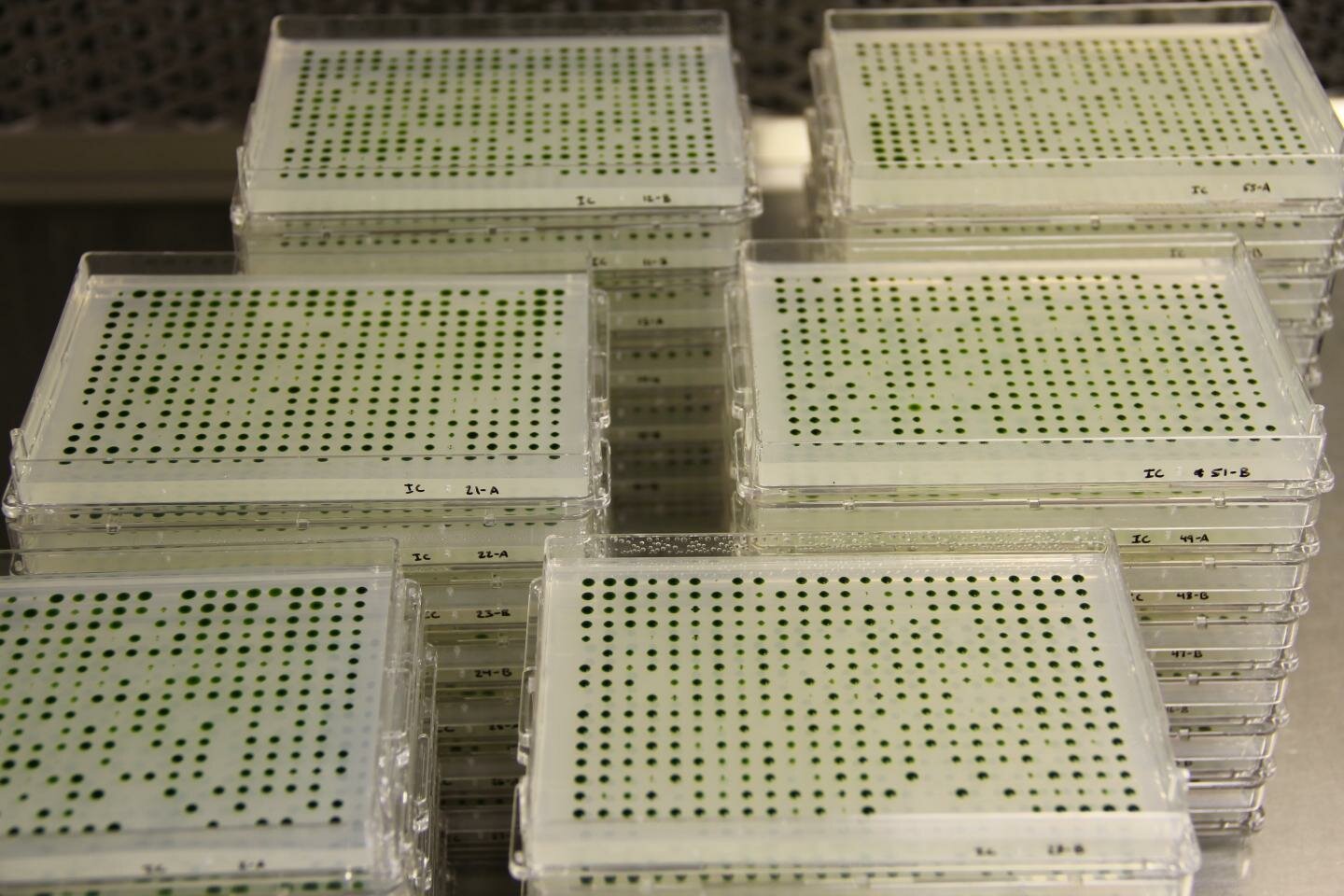 It is not easy to be green. It takes thousands of genes to build the photosynthetic machinery that plants need to harness sunlight for growth. And yet, researchers do not know exactly how these genes work.

Today, a team led by researchers at Princeton University has created a public "library" to help researchers discover the role of each gene. Using the library, the team identified 303 genes associated with photosynthesis, including 21 new genes with high potential to provide new information on this vital biological process. The study was published online this week in Nature Genetics.

"The part of the plant responsible for photosynthesis is like a complex machine made up of many parts, and we want to understand what each part does," said Martin Jonikas, an assistant professor of molecular biology at Princeton. "This library, we hope, will be one of the bases on which people will support to make the next generation of discoveries."

Unlocking the role of each gene could enable researchers to design plants for faster growth, potentially meeting the world's future food needs. Plants could also potentially be modified to absorb more carbon dioxide, helping to cope with climate challenges.

The library, funded largely by a grant from the National Science Foundation, is made up of thousands of single-celled algae living in ponds, known as Chlamydomonas reinhardtii, or Chlamy. Each "book" in the library is a strain of Chlamy with a single mutation. The more than 62,000 mutant strains housed at the Chlamydomonas Resource Center of the University of Minnesota cover more than 80% of Chlamy's genes.

"As this species of algae is often used as a model to understand more biological processes, this library will be an important resource," said Karen Cone, Program Director at the National Science Foundation, who was the the main funder of this research. . "The partnership between the Jonikas Group and the Chlamydomonas Resource Center improves the accessibility of this valuable resource to the community, which will enable new discoveries, particularly in one of NSF's priority research areas," Understand the rules of life "."

Due to the various challenges inherent in the Chlamy genome, the project lasted nine years. Throughout the project, researchers used robots to keep generations of cells alive by modifying the nutrient-rich liquid medium in which they live.

The project began in 2010 while Jonikas and his team were at the Carnegie Institution for Science on the campus of Stanford University. It ended in Princeton, where the Jonikas laboratory moved in 2016. The project involved a collaboration with Arthur Grossman, principal investigator at Carnegie and with the Chlamydomonas Resource Center managed by Paul Lefebvre, professor of plant and microbial biology at University of Minnesota.

The ability to observe a Chlamy cell with a single defective gene among all other genes in operation allows researchers to determine the role of this gene. For example, if the cell is struggling to move, then the function of the defective gene probably involves movement control.

Jonikas compared Chlamy 's mutant library to a library containing thousands of copies of a construction manual from a car, each copy missing from a different section. Whatever the manual used, it would remain a part on the car, which would make it unable to function as expected.

"The horn may not work, or the steering wheel may not turn," Jonikas said. "Then you would know that the missing section contains the instructions for that part of the car."

The library allows researchers to simultaneously test multiple strains of mutant Chlamy because each mutation is labeled with a unique "DNA barcode". For this study, researchers placed thousands of Chlamy strains in a single vial and exposed them to light. Strains that did not grow were more likely to contain a gene involved in photosynthesis.

One of the newly identified genes is CPL3, which would play a role in the accumulation of protein "parts" of photosynthetic machinery. The team is now studying whether the gene helps algae to adjust their photosynthetic activity to variations in sunlight.

The mutant library can be used to study other areas of plant biology, such as intracellular communication and Chlamy's ability to move through his environment using a tail-type eyelash.

Xiaobo Li, the first author of the study, was a postdoctoral researcher at Princeton when the team completed the library. "We hope that the library of Chlamydomonas mutants and the identified genes will lead to many fundamental discoveries in photosynthesis, cell motility and many other processes," said Li.

Weronika Patena, a senior bioinformatics analyst at Jonikas Lab, has written computer programs that analyze large amounts of data to identify the genes most likely to be involved in photosynthesis. "I think the success of this project will dramatically accelerate research on photosynthesis and other processes for which Chlamy is a good model and will bring a lot of value to the scientific community," she said.

Explore further:
A new technique will accelerate the genetic characterization of photosynthesis

More information:
A library of algae mutants from an entire genome and a functional screen identify the genes required for eukaryotic photosynthesis, Nature Genetics (2019).