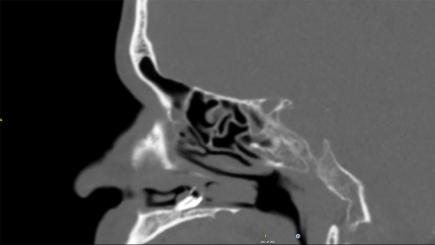 A man was operated on to remove a tooth from the nostril after suffering from an unexplained stuffy nose for two years.

Danish doctors were surprised to discover this rare disease in a 59-year-old man who had complained of problems with nasal congestion, loss and loss of his sense of smell.

The individual suffered a facial trauma when he was young, which caused him a broken jaw and nose, but the doctors stated that there was no evidence to suggest that a repositioning following the incident was related to nasal growth.

"Our patient most likely had the tooth retained for most of his life, but his symptoms had appeared late," writes Dr. Milos Fuglsang in BMJ Case Reports, who proceeded to extract a tooth in the center for the ears, nose and throat of Aarhus.

After a scan, the doctors decided to use an endoscope to perform a surgical extraction.

The exact cause of the rare disease is unknown, only 23 patients having been identified in a previous study from 1959 to 2008.

Experts believe that this could be due to trauma, cyst infection or developmental disorders such as cleft lip or palate, but have no obvious explanation for this particular case.

The problem can affect both children and adults, but cases reported so far suggest that it is more common in men than 60%.

It appears that the extraction procedure ended the person's stuffy nose problem and that no new symptoms were reported a month later.