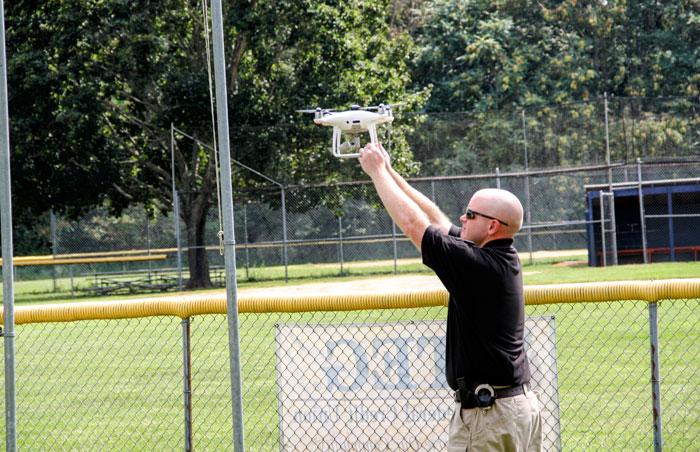 The unit has been deployed on several search and rescue operations, including an incident in July on the Ten Mile River in Wassaic. During this rescue mission to save two people stranded in the rain-swollen river, a sheriff’s drone was deployed to assess potential dangers and guide rescue swimmers to stranded victims.

The idea was brought to the agency about five years ago by Detective Kurt Twaddell. Originally, the drone was mainly used for accident reconstruction investigations.

The unit, which reports directly to the head of the department, Jason Mark, has been deployed on several occasions to assist with missing persons missions. “The main purpose of this unit is to help people,” said Detective Sgt. Adam Harris, the unit’s supervisor.

Harris credited fellow Detective Twaddell with bringing the idea to the sheriff’s office. “Kurt is the unit’s technical advisor,” he said. Twaddell is one of five FAA licensed drone pilots in the department. “Newer technology allows us to send the stream of what the drone sees directly to a monitor in our vehicles or relay it to an incident command post as long as we have cell service in the area,” he said. said Detective Twaddell, who noted that about 40 percent of law enforcement agencies nationwide now own at least one drone.

The UAS unit, one of the most active in the sheriff’s office, is working on a deal to provide assistance to agencies in the area, including the US Coast Guard, for calls on the Hudson River.

Stressing that drones are not used for surveillance purposes, Harris said the unit recently worked with Dutchess County Emergency Response to deploy a drone to assess storm damage in hard-hit areas of the county. , and drones were used to give detectives an aerial view of crime and accident scenes.

“Technology is improving and our current UASs are nearing the end of their lifecycle,” Twaddell said. The new units include thermal imaging capabilities that will improve the success of search and rescue operations, according to the detective.

The UAS unit is looking to replace the aging fleet with newer models with advanced capabilities and with warranty plans to cover equipment. “We are currently looking for alternative funding to replace our six drones. Because we have multiple FAA licensed pilots, the grant opportunities are more accessible, ”said Harris. The detective sergeant also noted that funding for what he calls “one of the most important units in the department” may also be available from asset forfeiture.