Huawei P30: Perhaps the best versatile phone on the market 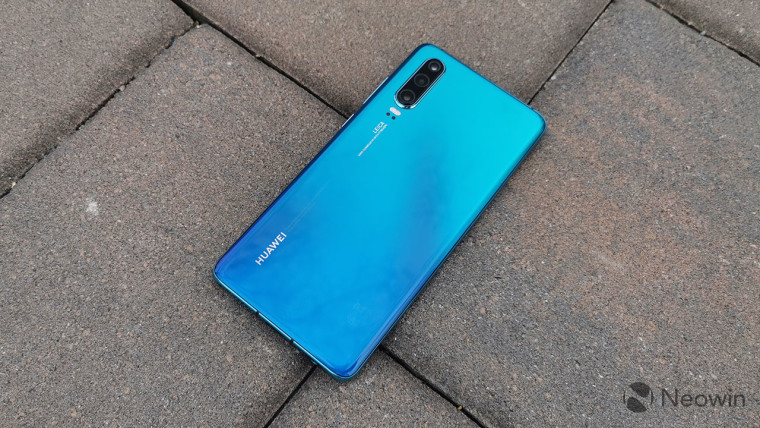 If you're a fan of smartphone cameras, the Huawei P30 Pro has probably already caught your eye. When I wrote this review, I announced that he had the best smartphone camera on the market and that I was surprised that Huawei could have improved the P20 Pro, already stellar.

But as always, the non-pro model tends to be neglected. This is natural, because the Pro projects such a high shadow on it. I am always impressed by the non-pro model and the P30 has exceeded all my expectations.

Although the P30 camera is not quite up to the P30 Pro, it still remains better than any other smartphone camera. And in terms of being a phone, I like it better than the P30 Pro. It does not have the curved edges on the sides of the screen, and Huawei finally gave it the OLED treatment.

There should also be models with 8GB of RAM and 64GB, 128GB and 256GB of storage, but that's the one that Huawei gave me to review.

Huawei think people do not want phones that look boring. I tend to be in agreement. I'm tired of seeing yet another black phone. Last year, with the P20, he introduced the Twilight color, a mix of sky blue and purple. This year's P30 comes in a range of new colors, including Aurora, Amber Sunrise and Breathing Crystal. 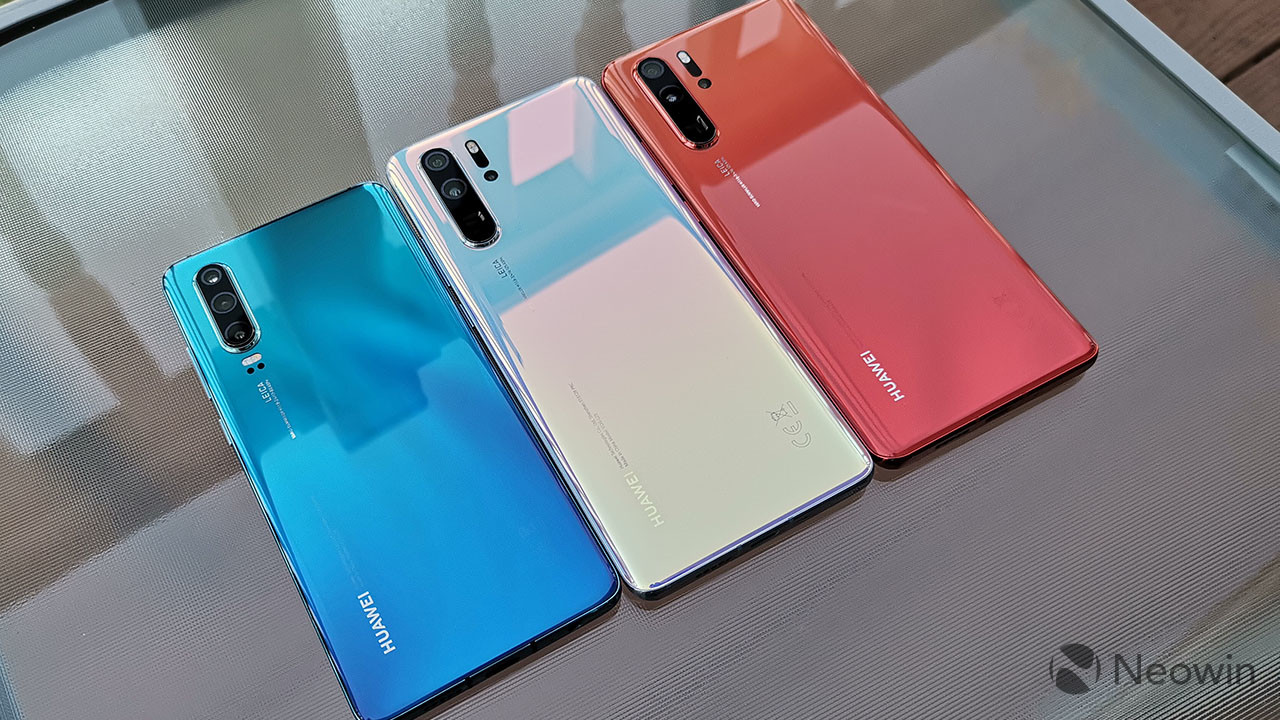 When asked why there was no Twilight this time, the answer was simple. The company did it, everyone copied it and now is the time to do something new. There are also options for Pearl White and Black, if you like boring things.

Like almost all flagship devices today, the P30 is a glass sandwich. Unfortunately, there is no wireless charge in the non-Pro model, which always disappoints me. The glass is breakable, so if you drop that thing, you do not just harm the screen. If you switch to a glass at the back to make it look nicer and that there is no functional benefit, this should not be done. 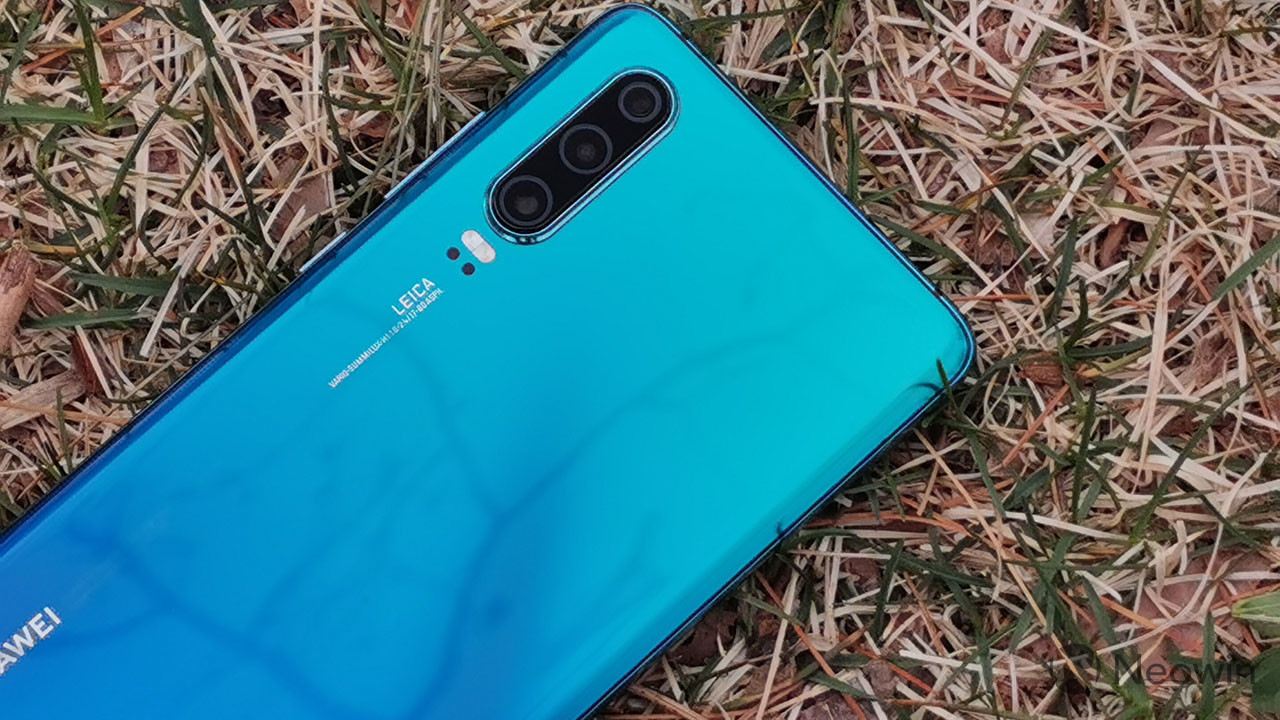 At the top left of the back of the phone is the rear camera module. As with the Pro, there are three goals, although there is no TOF sensor. The dual-tone flash is placed under the module rather than to its right. The third lens is not the same zoom periscope lens as on the Pro, so you do not get that square lens to look fun. 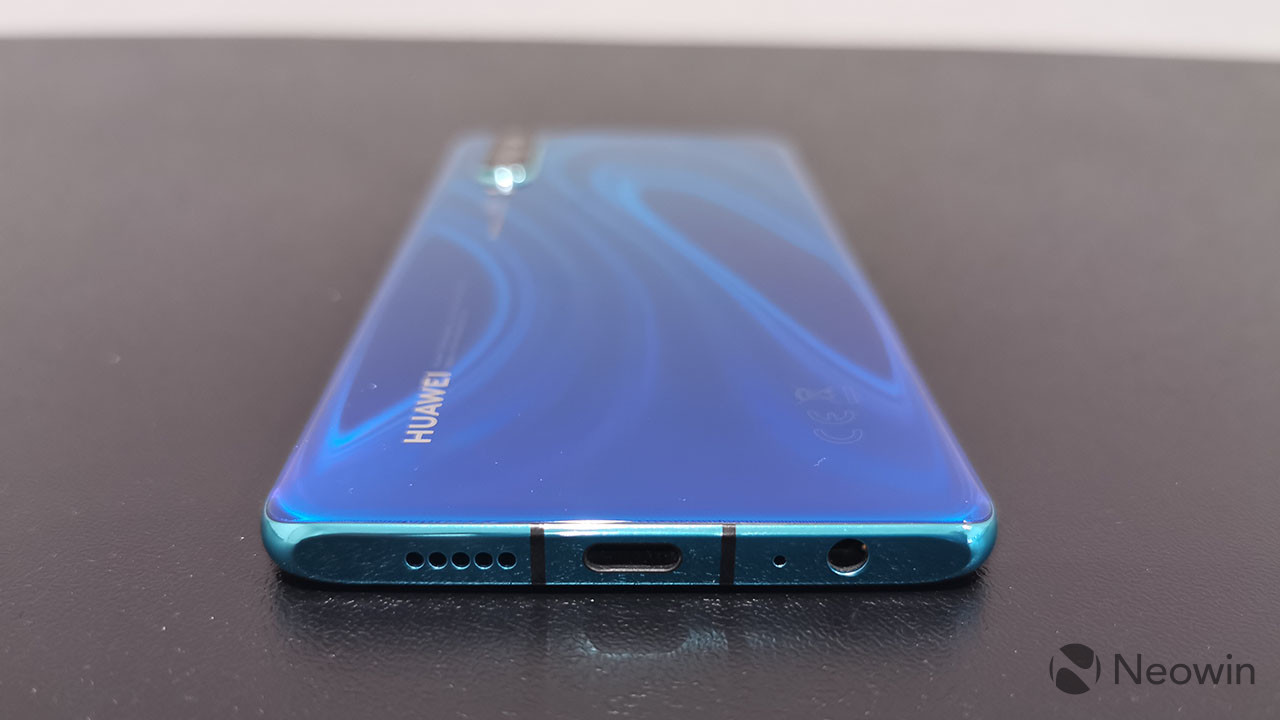 What is particularly interesting with the P30 is that it retains its headphone jack. At the bottom of the device are the 3.5mm combo audio jack, a Type C USB port and a speaker grille. As always, I am a big fan of all these things being on the same side of the device. 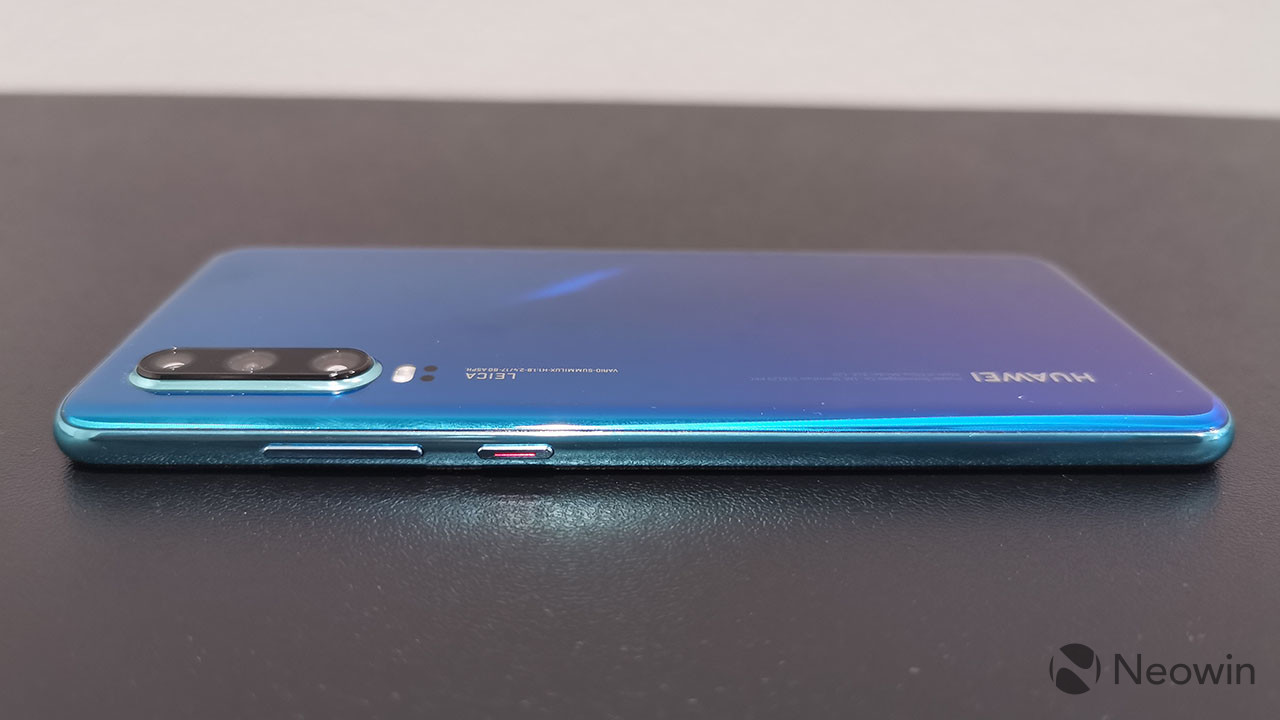 On the right side there is a volume rocker and the power button. On the left, a slot for dual nano-SIM cards. 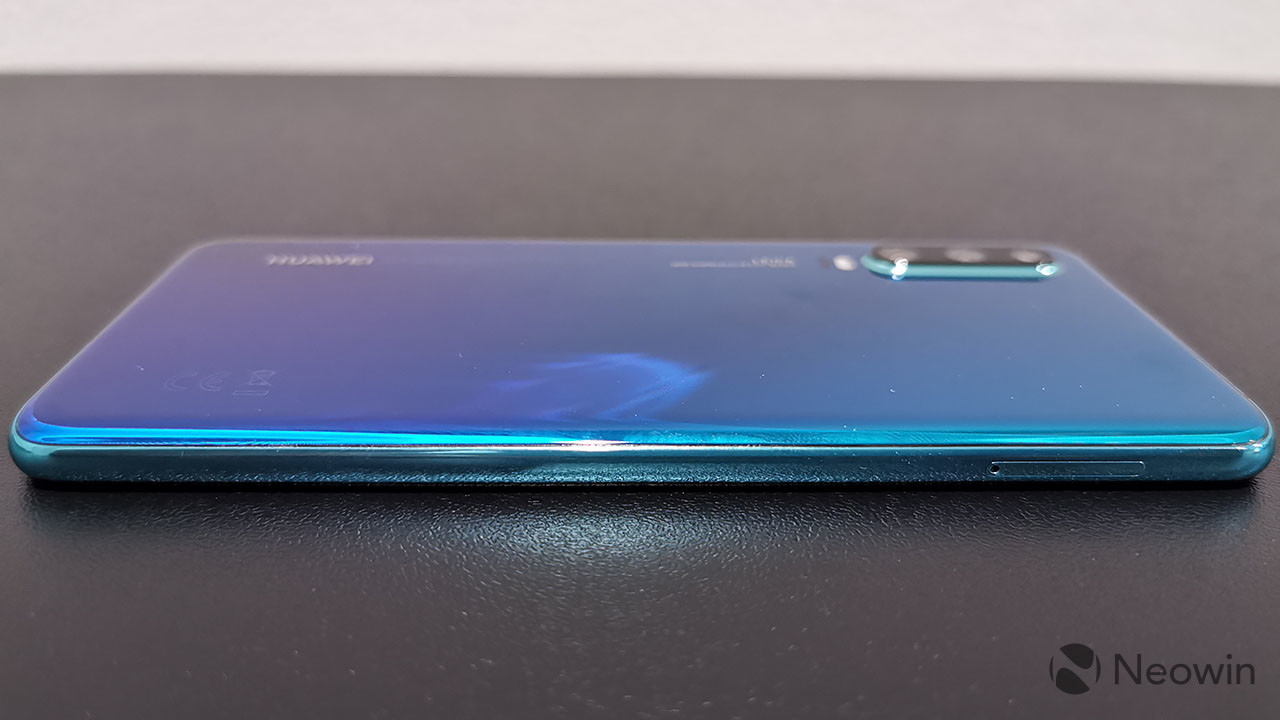 Another thing I want to note about the design is that on the front of the device, there is a speaker on top of the screen. Yes, it's common in almost all smartphones, but the P30 Pro does not have one. The Pro really pushes the sound through the glass.

The Huawei P30 uses a 6.1-inch, 1080p, 19.5: 9 OLED display with a drop-shaped notch. The phone is quite small compared to others on the market, and that 's one of the reasons I love it. It's just comfortable to hold and carry.

Of course, 6.1 inches does not mean what it was. The screens are measured diagonally, so in the era of 16: 9 cameras, 6.1 inches were huge. Now that phones have longer image formats, 6.1 inches have a smaller area than before. 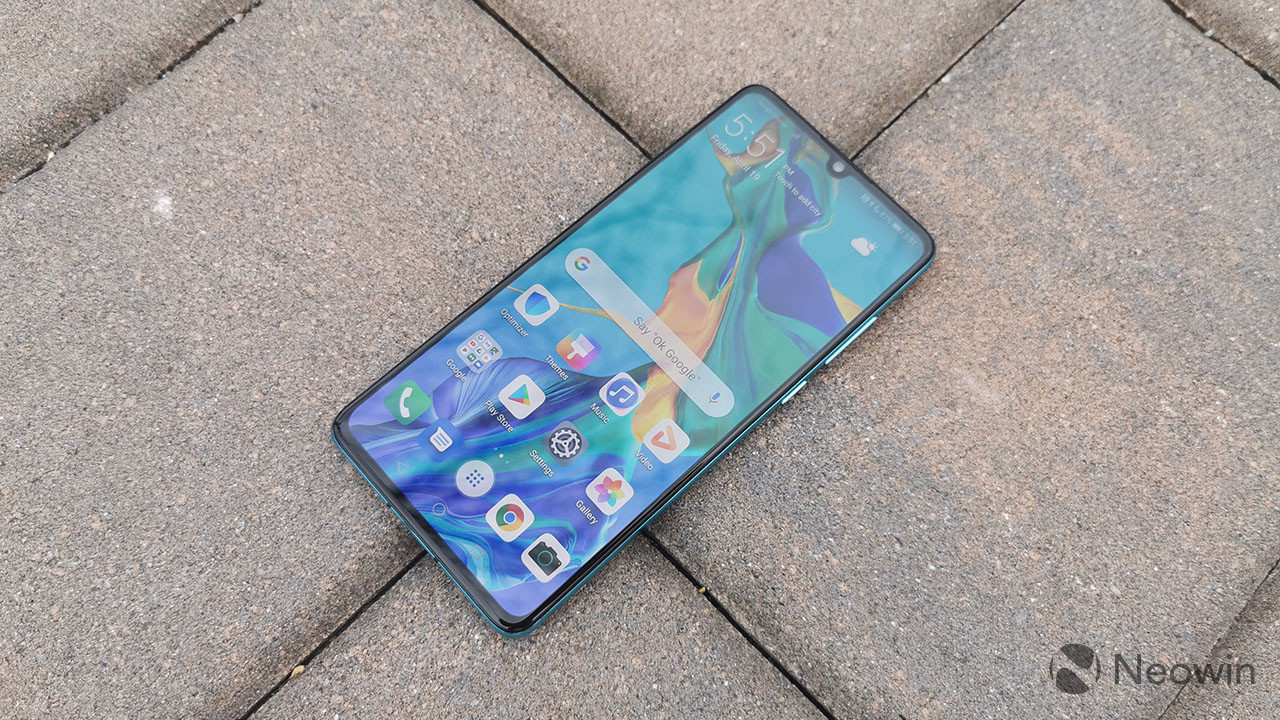 The screen is OLED, which is nice. For two years, Huawei has been using OLED in the Pro model and using LCDs for non-Pro. The main advantage of OLED displays is that pixels can be turned off, which provides true blackness. The colors above tend to be more vivid, as opposed to a faded effect on an already backlit LCD.

It also means that Huawei has included a permanent display option with the P30, since it only offers it in OLED displays. Of course, this means that you can see the time, date, battery status, weather, etc., when the device is locked. 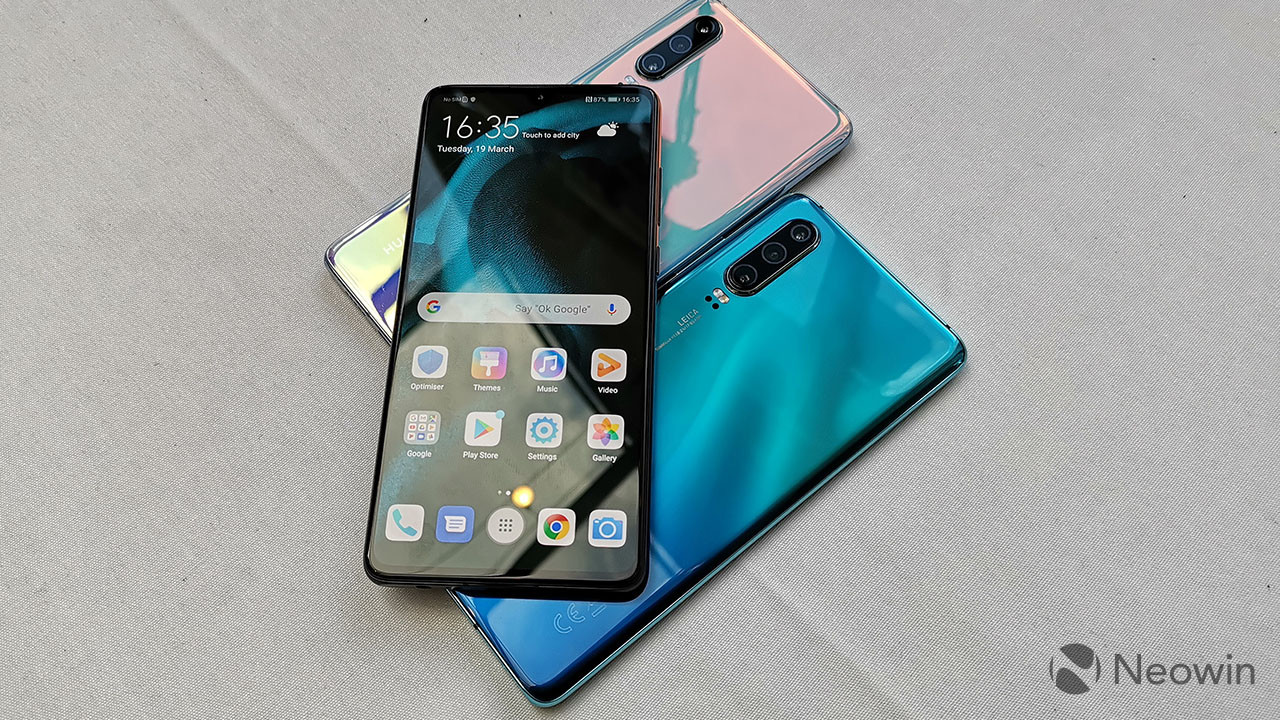 Strangely enough, and probably a bug, is that the fingerprint sensor light is constantly flashing on the permanent display, even at night when the latter is set to be off.

The fingerprint sensor works pretty well, and it's a little surprising. The previously displayed fingerprint sensors were not very good and it is good to see the technology improve. Placing my finger precisely without looking, however, is a minor problem because there is no physical indicator to locate the sensor.

Another thing I want to point out is that the display is flat, instead of having the curved sides of the P30 Pro. I like it a lot better. Telephones with curved edges can be difficult to use, especially with one hand. It is too easy to accidentally touch the screen while holding it.

I would love to tell you that the camera does not unanimously and that Huawei has put everything in the P30 Pro, but that would be just wrong. The main sensor is a 40 megapixel SuperSpectrum lens certified Leica. Rather than using traditional RGB, the company replaced the green pixels with yellow, which resulted in 40% more light.

The aperture on the main sensor is a bit smaller on the P30 than on the Pro, at f / 1.8 instead of f / 1.6. Although this means that low-light performance is not as good, it still fumes competition, as long as this competition is not the P30 Pro.

All of the above pictures were taken in my hotel room in Paris at night, with the light off. I continue to use these samples because they represent the perfect example of the low light capabilities of these two phones and the way they compete against each other. See a demonstration of this kind of thing at an event and see how easy it is to do it in person.

Here are some examples of the main camera.

In the end, the camera is great and you can not discuss what it can do in low light conditions. But there are two other sensors, one for ultra-fast and one with 3x zoom.

So let's talk about the zoom. In a camera, zooming works by bringing closer or closer two lenses. In a smartphone camera, there is simply not enough room for that. OEMs have therefore proposed multiple solutions.

Single-lens cameras use digital zoom, which is more like trimming the image. A smartphone camera can see a certain field of view and this field of view contains a certain amount of pixels. If you want to see half less, you cut half of the pixels and therefore half the quality. The more you zoom in, the more you lose in quality. At the time of the Nokia Lumia 1020, one solution was to build a 41-megapixel lens. With a sufficiently high resolution, you can cut more images without losing significantly in quality.

Another solution is to build a second goal that simply sees less. Apple and Samsung have 2x zooms in their phones for this purpose. Huawei introduced a 3x zoom lens last year with the P20 Pro, and that is also what is used in the P30. In combination with the high-resolution main sensor, Huawei promises a 5x hybrid zoom.

The Camera application allows you to zoom in up to 30 times, even if you do not really want it.

One of the reasons I spent a lot of time with it was because I wanted to compare it to the P30 Pro, which has a flight time sensor. This sends a light and records the time needed to return the light. It's better to record the depth.

You can see on the diaphragm sockets that you can adjust the aperture, and therefore the amount of blur in the background. To be honest, the opening mode is still one of my favorite features on Huawei cameras.

I would however call special attention to the singer on the boat, where the pictures came out pretty blurry. Take another look, this time compared to the P30 Pro.

It is clear that the P30 Pro is the winner between the two devices, but it is also clear that the P30 is a beautiful smartphone camera. I think for the vast majority of users, you are not making any significant sacrifice by buying the P30 instead of the P30 Pro, and you may appreciate some of the other benefits of the device.

I say it often and I say it again, but when it comes to performance, you are good. Any modern flagship phone has all the performance you need. Obviously, no developer targets higher specifications than the high-end chipset. 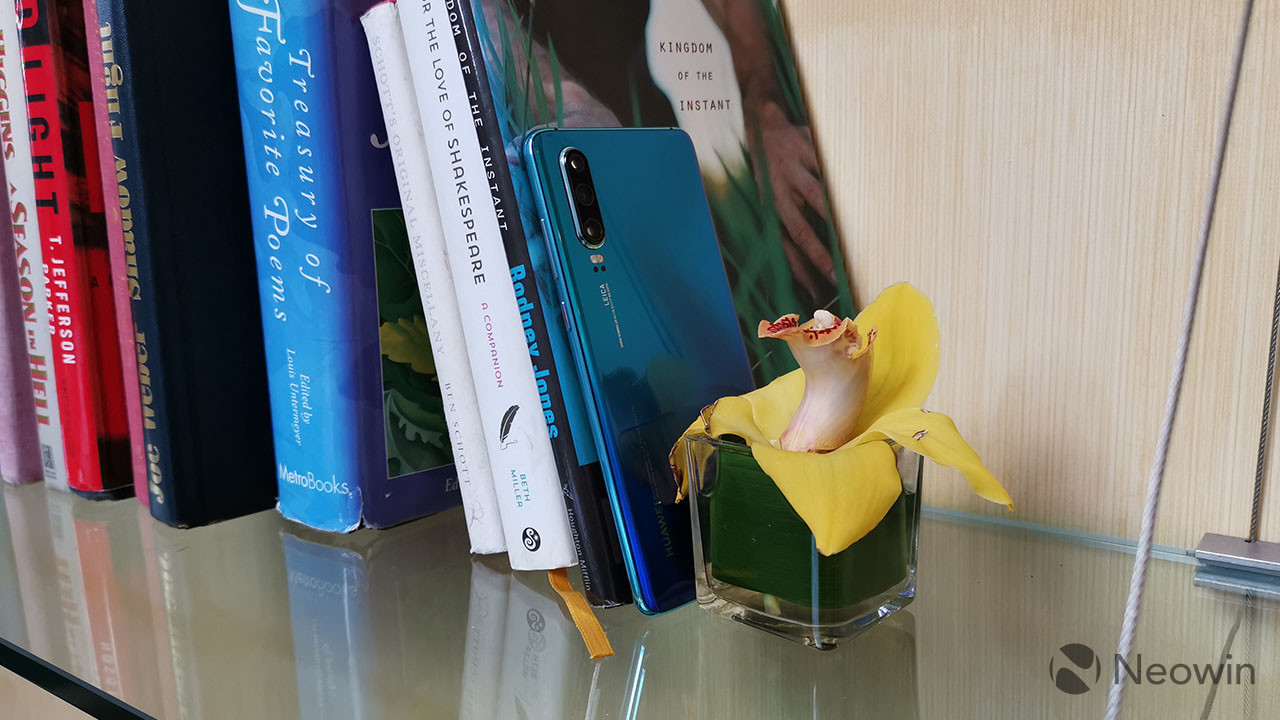 However, there is one big flaw: the Kirin 980 does not support 4K video capture at 60 frames per second, which other companies have been using for about a year and a half. Apple was the first to do this with the iPhone 8/8 Plus / X, and then Qualcomm enabled this feature with the Snapdragon 845. Samsung has therefore followed suit with the Galaxy S9 / S9 Plus. Now it seems that all flagship phones can capture 4K videos at 60 frames per second, with the exception of those made by Huawei, which is a real disappointment considering the focus of the camera .

But other than that, you are good, as is the case with any flagship phone. As for battery life, I had no problem spending the day. Although there is no wireless charge, it supports the Huawei SuperCharge. This is not 40W SuperCharge like the P30 Pro; the charger with which it is delivered is 22.5W, and it is always very fast. If you run out of juice, you can plug it in for half an hour and you'll be ready to go.

For performance testing, I used Geekbench 4, AnTuTu and GFXBench. Geekbench 4 provides a test of the CPU. 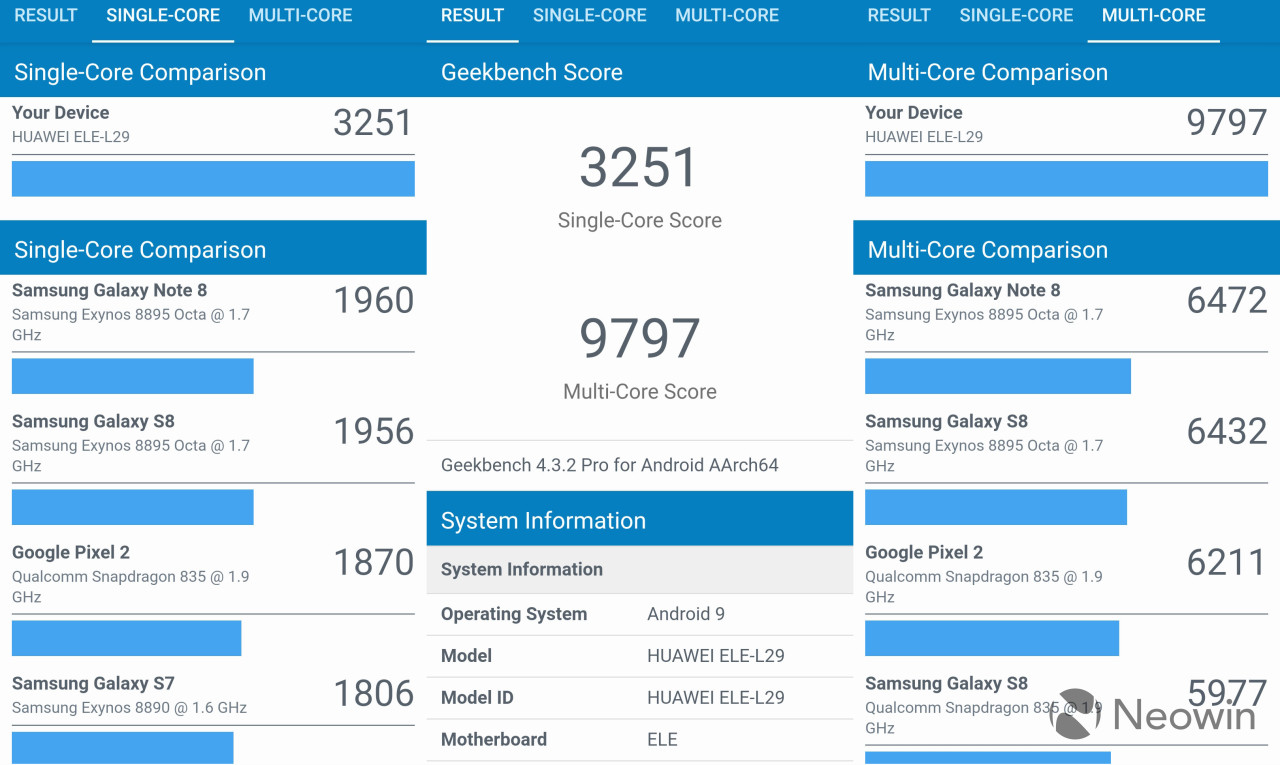 The next is AnTuTu, which has an all-in-one test. 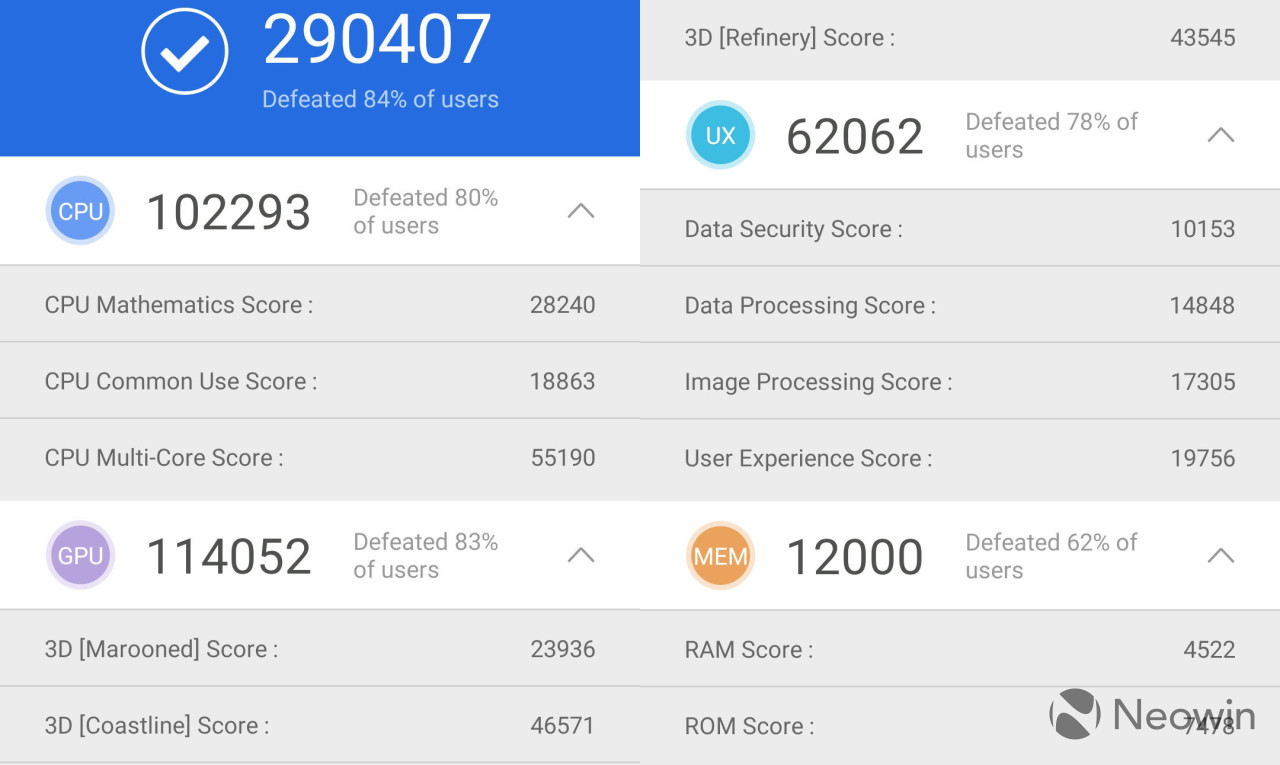 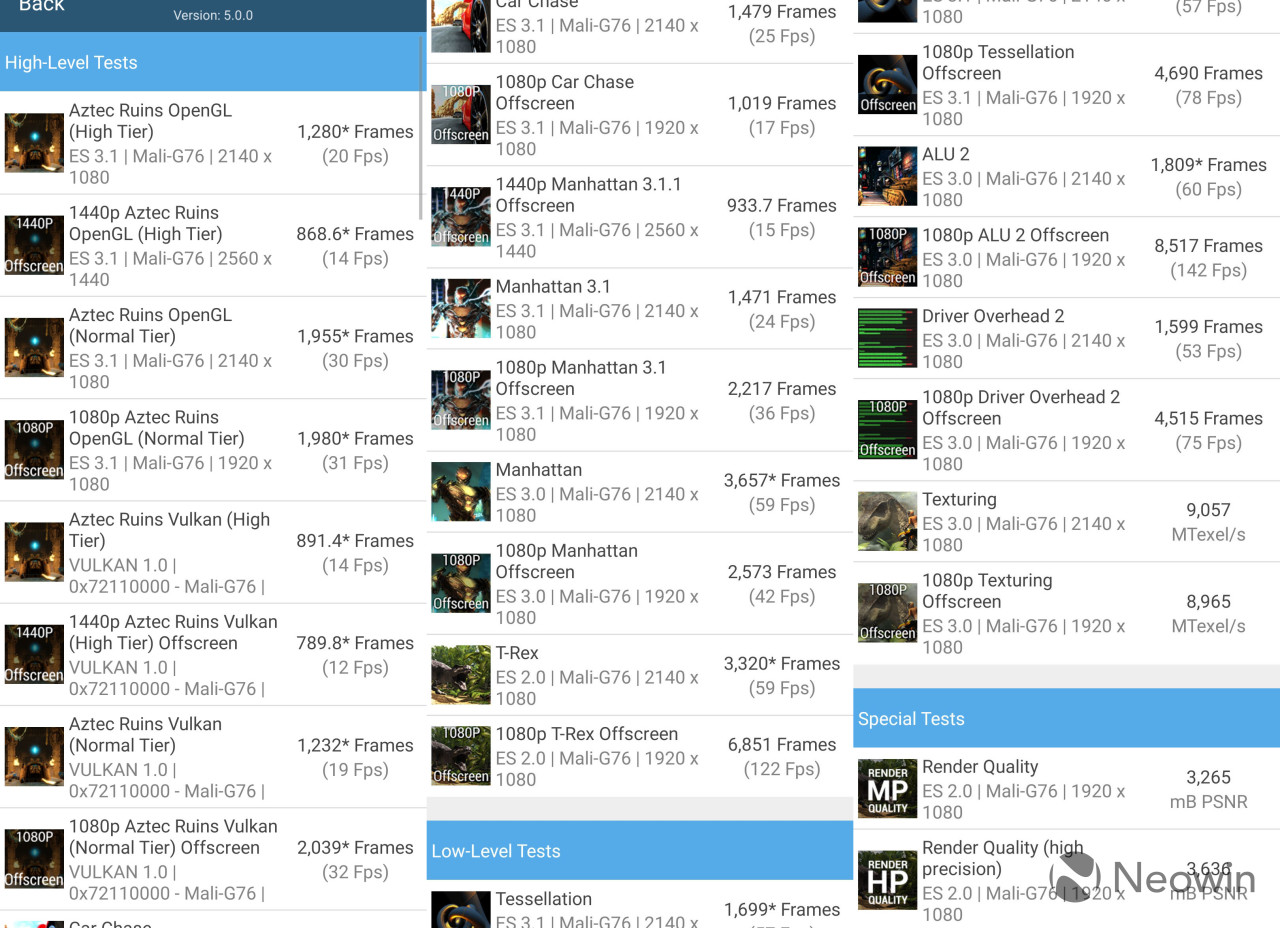 The Huawei P30 is one of my favorite devices that I used. In fact, with the exception of the camera, I would take it any day on the P30 Pro. I like the size, the form factor, the fact that the screen is actually flat, and more. 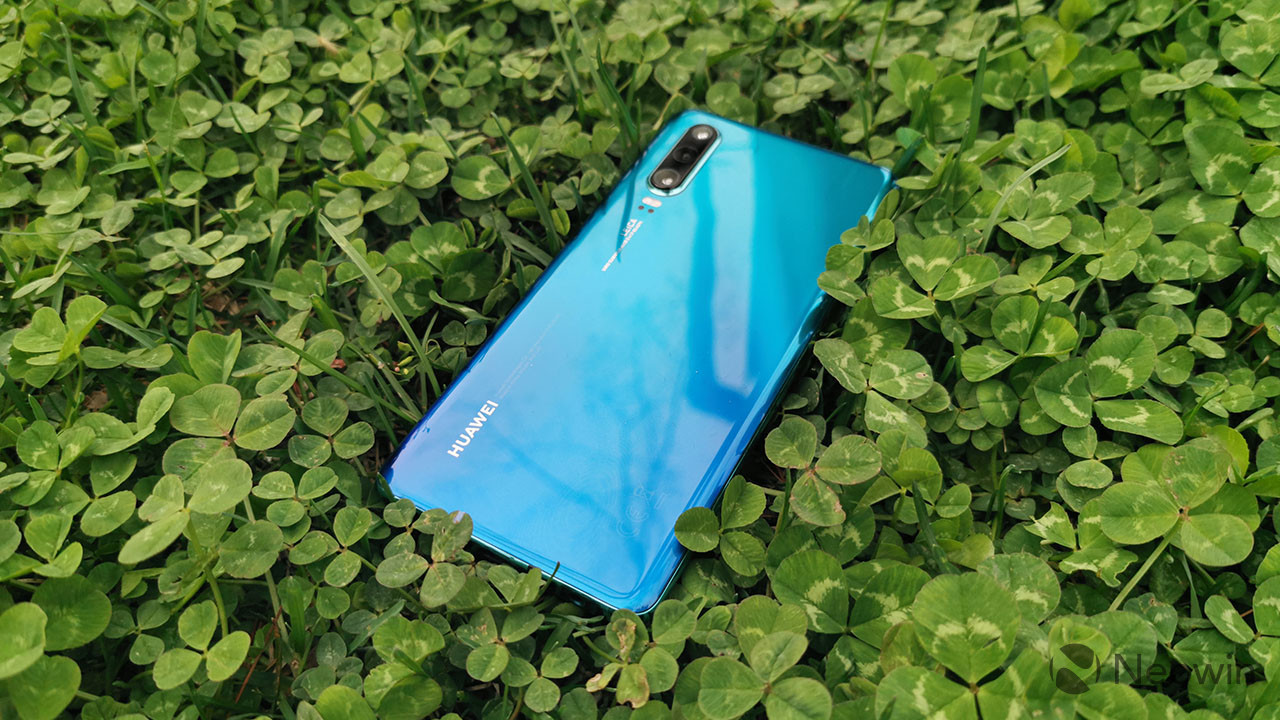 The biggest drawbacks for me are the things that the Pro has, such as wireless charging. In addition, this flight time sensor makes a real difference in portrait mode.

As for the camera, it is the second best on the market, so it's hard to complain, apart from the lack of video capture 4K 60 frames / s. But if you want a great camera and a better overall experience, the P30 is the solution.