After three hours of testimony on a bill that would eliminate most of the vaccine exemptions, 180 people were still waiting to express themselves. Almost everyone was there to oppose Bill 3063, which the Oregon legislature has considered amid one of the largest measles outbreaks in the Pacific Northwest.

The Chair of the House Committee on Health Care gave priority to people who had come from inside Oregon to get to the Capitol, and about 75 people were able to speak. Rep. Andrea Salinas, D-Lake Oswego, stated that starting at 3:00 pm At the start of the work, more than 1,000 written documents had been submitted for registration at such a rapid pace that the workers who put online could not follow.

But this uproar is nothing new in the vaccine debate. The Legislative Assembly in Washington attended protests outside the building and also filled courtrooms at the first hearing of a similar bill that would eliminate all non-medical exemptions from the measles vaccine , mumps and rubella. 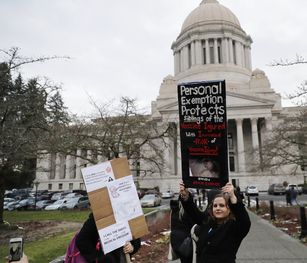 Lawmakers in the state of Washington are considering amending the law by allowing parents to reject vaccines.

The Oregon version would remove religious, personal, or philosophical exemptions for all vaccines, a measure designed to increase the state's vaccination rate.

Oregon and Washington are at the heart of a measles outbreak that affected five people in Multnomah County and 65 in Clark County. Georgia and Hawaii both responded to the effects of the epidemic.

But even for people who have not contracted the highly contagious virus, the large number of cases has prompted hundreds of people to vaccinate this year compared to the usual years. And he revived a long debate about whether parents and guardians should be allowed to send their children to school with the risk of exposing other children to measles.

"We can not allow these easily preventable diseases to harm the children of our state when we have the means to stop them," said co-sponsor of the law, Cheri Holt, R-Bend.

They introduced a bill that never passed the same committee in 2015.

But this time, they hope that the measles epidemic could prompt action.

What will it take to strengthen immunization laws in Oregon, in the state of Washington? An epidemic of measles could help.

But both states have been here before. The same goes for the anti-vaccination organizations already mobilized to try to block the proposed legislation.

However, in many states, groups opposed to compulsory vaccination are effectively succeeding in gathering large crowds to thwart these efforts. Oregonians for Medical Freedom, the main group opposing immunizations, was at the hearing on Thursday night, as was Dr. Paul Thomas of Portland, an important voice in the anti-vaccination movement.

He told lawmakers that they would create hundreds of autism cases if they approved the bill. This assertion, which has been echoed by many others at the hearing, is based on dissenting reports of a link between vaccines and autism.

Others have presented their argument in the form of "choice", namely that parents will have to choose between a quality education for their children or a shot that, in their opinion, could harm their child.

"This is the first time I see a bill that endorses the vaccine instead of education," said Rep. Dennis Linthicum, R-Klamath Falls, in his testimony against the bill.

There is considerable scientific consensus that vaccines are safe and effective in stopping the spread of deadly and contagious diseases.

Legislators supporting the bill say parents can always choose not to vaccinate. However, they will have to go home or find ways for children to go to school online.

Lawyers in several hospital systems, such as Oregon Health & Science University and PeaceHealth, as well as the Oregon Education Association, the Oregon Pediatric Society and the Oregon Nurses Association, have approved the bill.

Parents of children in chemotherapy or who can not be vaccinated also came to support the bill.

However, the most passionate pleas came from those who compared their fate to Brown v. Board of Education and Nazi concentration camps, claiming that those who choose not to vaccinate their children would be separated unfairly.

Some said they left California after passing a similar bill in 2015 and others announced that they would leave Oregon.

Immunity rates in California increased from almost 93% before the law was passed to eliminate 97% exemptions in the 2017-2018 school year.

While people around the state have rushed to get vaccinated this year, she warned that momentum is often lost once the epidemic is over.

"We can not count on the ebb and flow of this in decision-making," Hargunani said.