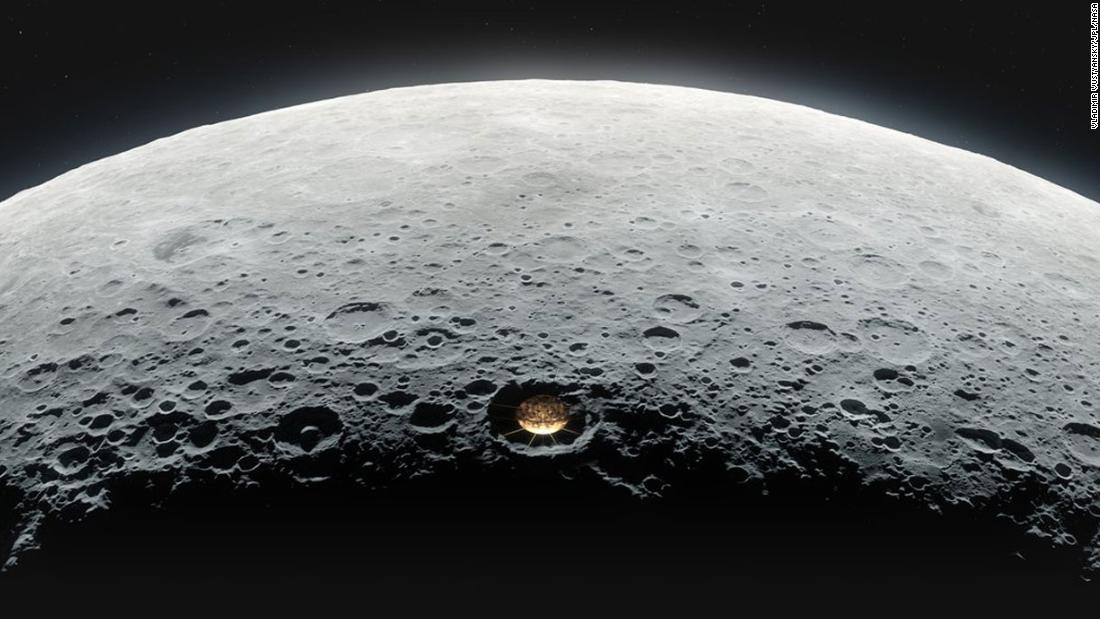 Although not a fully-fledged official NASA mission, the concept of the Lunar Crater Radio Telescope, or LCRT, has been in development for years. The project recently received an increase of $ 500,000 by entering the second phase of NASA’s Innovative Advanced Concepts program.

The lunar telescope would involve robots suspended from a wire mesh in a crater on the other side of the moon to create a radio telescope. Imagine the famous Arecibo Observatory in Puerto Rico, but on the moon.

The telescope could measure radio waves a few hundred million years after the Big Bang that created our universe, before the appearance of the first stars.

The details of this chapter in our universe’s history have escaped cosmologists, and these radio waves could reveal what happened during that time.

“Although there are no stars, there was enough hydrogen during the dark age of the universe – hydrogen that would eventually serve as the raw material for the first stars,” Joseph Lazio said. , LCRT team member and radio astronomer at NASA’s Jet Propulsion Laboratory in Pasadena. , California, in a statement.

“With a sufficiently large radio telescope off Earth, we could follow the processes that would lead to the formation of the first stars, perhaps even find clues as to the nature of dark matter.”

Projects like the LCRT are selected by the program through a peer review process to assess proposals for missions that would deepen our understanding and exploration of space. This telescope is in its infancy, which could take years of technological development, but this approach is fueling the selection of future NASA missions.

“Creativity is the key to future space exploration, and the promotion of revolutionary ideas today that may seem extravagant will prepare us for new missions and new approaches to exploration in the decades to come,” said Jim Reuter, associate administrator of NASA’s Space Technology Missions Directorate, in a statement. .

The dark side of the moon

The radio telescopes that scientists use on Earth cannot assess the radio waves of this cosmic age because they are blocked by the ionosphere, which are the charged particles in the upper atmosphere of our planet. Earth is also teeming with its own radio broadcasts that can prevent weak signals from being tracked by radio astronomy.

The opposite side of the moon, where only robots have ever walked, is a place with no atmosphere and perfectly still – which would prevent any radio interference from Earth.

“Radio telescopes on Earth cannot see cosmic radio waves at around 10 meters (33 feet) or more because of our ionosphere, so there is a whole region of the universe that we just cannot see,” Saptarshi Bandyopadhyay, senior researcher for LCRT and a robotics technologist at JPL, said in a statement. “But the previous ideas of building a radio antenna on the Moon were very resource intensive and complicated, so we had to come up with something different.”

The larger the radio telescope, the better the sensitivity for tracking long radio wavelengths.

A crater extending over 3 kilometers wide could accommodate a radio telescope with an antenna over 0.5 miles (1 kilometer) wide.

For reference, Arecibo was 305 meters wide and the Five Hundred Meter Aperture Spherical Telescope (FAST) in China was 1,600 feet wide. Both were built inside natural depressions to support their bowl-shaped structures.

In these bowls are thousands of reflective panels to make the entire dish receptive to radio waves. Suspended from cables above the dish, a receiver can measure radio waves as they bounce off the bowl. The towers anchor the cables. Arecibo became inoperative after some of these cables and towers failed, crashing into the antenna below and shattering the panels.

Bandyopadhyay and his team want to streamline this to a more basic design that won’t require hauling heavy equipment to the moon.

Instead, the robots could build the dish using a wire mesh covering the center of the crater. A spacecraft could transport the mesh from Earth to the moon while a separate lander would provide rovers to build the antenna.

These DuAxel rovers are a concept under development at JPL. Two single-axle rovers can stay connected using a tether, but detach from each other, one serving as an anchor on the rim of the crater while another strolls to the crater bottom for construction.

“DuAxel solves many problems associated with hanging such a large antenna inside a lunar crater,” said Patrick McGarey, LCRT and DuAxel team member and robotics technologist at JPL, in a statement. . “Individual Axel rovers can enter the crater when attached, connect to the wires, apply tension, and lift the wires to suspend the antenna.”

The latest funding to the team will help them identify challenges, target different approaches to the mission, and determine the capabilities of the telescope.

The team also decides whether the rovers are to be fully autonomous or whether they will need a human operations team on Earth.

The researchers will work on these decisions over the next two years in the hope that their project will be selected for further development.

“The development of this concept could produce important breakthroughs along the way, especially for deployment technologies and the use of robots to build gigantic structures outside of Earth,” Bandyopadhyay said. “I am proud to work with this diverse team of experts who inspire the world to think about great ideas that can make groundbreaking discoveries about the universe we live in.”

Other projects operating under the Innovative Advanced Concepts program include a small spacecraft “swarm” that could study the atmosphere of Venus, a Pluto lander, an asteroid-hunting spacecraft, mushroom habitats, and a ship. space that could explore the solar system and interstellar space.