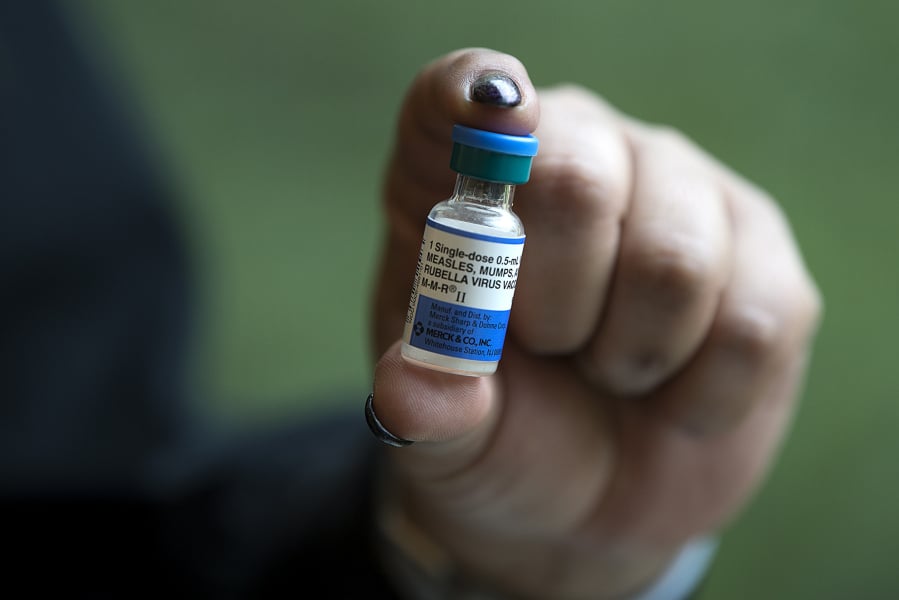 Following the measles outbreak in the county, Evergreen, Vancouver and Battle Ground public schools temporarily excluded 754 students who had not completed their MMR vaccination program.

The 754 excluded students were among the 7,567 students attending the 10 Evergreen, Vancouver and Battle Ground public schools. There are 14 public schools, private schools and daycares identified as places of exposure to measles by Clark County Public Health.

Evergreen Public Schools reported 218 exclusions in four schools and Vancouver 138 in three sites where children were exposed to measles. Battle Ground has excluded 74 students from Tukes Valley Elementary and Middle School, 81 from Maple Grove School (K-8) and 243 from River HomeLink, the school-based home school program, in which students may have hours of classes on campus.

During a school exclusion, children can do homework at home, but can not attend classes or events on campus.

"The challenge for us when an epidemic is to exclude students is that we want our students to go to school," said Battle Ground spokeswoman Rita Sanders. "Research has shown that one of the important aspects of success is that students are in school. When we have to exclude students, it's really difficult. "

The exclusion periods in the three school districts have now expired, allowing all students to fully participate back in the school. But for unvaccinated children, epidemics like this have a cost. Children miss school and their parents need to find a way to keep their children and make alternative plans.

"The school continues normally. It's the kids who do not have the blows that are forced on them and who are forced to not go to school, "said Gail Spolar, executive director of communications and community engagement for Evergreen.

According to state statistics for the 2017-2018 school year, 53.9% of Evergreen's students had completed all immunizations. This was the lowest percentage in Clark County and the seventh lowest rate in Washington. Yet only 5.8% of students had a vaccination exemption on file for personal, medical or religious reasons.

This means that about 40% of students attending Evergreen were not in compliance with the immunization requirements. There may be several reasons for not complying: not receiving the latest vaccines in a series of vaccinations, having to wait for vaccination because of the required spacing between vaccinations, or needing new vaccinations required by Washington after leaving another state.

Holly Long, Evergreen's Health Services Manager, said her personal mission was to improve immunization rates. Since November 2017, when these state data were compiled, Evergreen's non-compliance rate has dropped from about 40% to 25%.

"We were working to improve these numbers before this outbreak occurred," said Long.

The measles outbreak has also resulted in an increase in measles, mumps and rubella vaccinations among Evergreen students.

As of January 18, Evergreen had 7.3% of students who did not comply with the MMR vaccine, which requires two doses. By February 8, their numbers had dropped to 3.3 percent, according to statistics provided by Long. Evergreen also had 12.6% of students with a MMR case exemption on January 18th, compared to 4.1% today.

Vancouver District spokesman Pat Nuzzo said that about five excluded students had received the complete MMR vaccine during periods of exclusion. She added that a handful of parents from Lieser School had provided up-to-date vaccination records for their students during the outbreak.

According to statistics from the Department of Health for the previous school year, Battle Ground documented that 86.3% of students had completed all immunizations, and 12.2% had benefited from an exemption. Battle Ground did not have up-to-date statistics on vaccination rates, Sanders said.

This year, about 95% of Evergreen's kindergarten class has been completely immunized, which health professionals say is about the same as the mark a community needs for herd immunity. Long and Spolar believe that Evergreen is improving in this area and that the epidemic has sped up things.

"I think it's taking something like this outbreak, we've also had pertussis outbreaks in the past," said Long. "It always catches people's attention and may make it more urgent and immediate."