More than half of Americans with uncontrolled asthma smoke marijuana

More than half of Americans who don’t have asthma under control are marijuana users, a new small study suggests.

Researchers have found that about a third of patients with untreated and uncontrollable asthma have smoked cannabis in the past, while a fifth report using it now.

Additionally, patients were more likely to report positive drug benefits such as less pain, decreased anxiety, euphoria, and better sleep than negative effects such as wheezing and coughing,

The team, from the American College of Allergy, Asthma and Immunology, say doctors need to educate themselves about smoking in their asthma patients and recommend other potentially safer routes such as edibles. 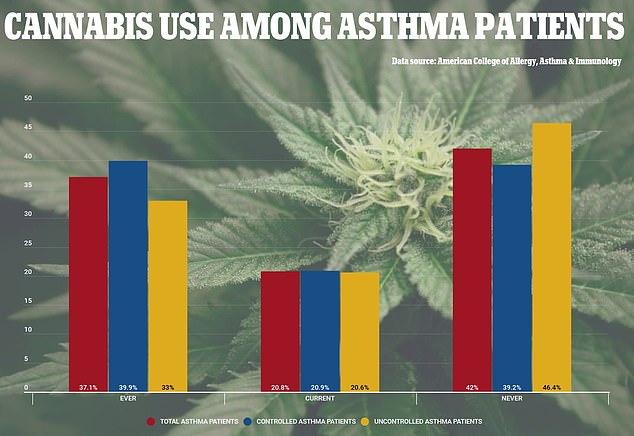 A new study from the American College of Allergy, Asthma and Immunology found that among uncontrolled asthma patients (shown in yellow), 33% had smoked weed in the past and 20.6% were current users.

“It surprised me that more than half of the cannabis users in this study who have asthma smoke it,” said lead researcher Dr. Joanna Zeiger, of the Canna Research Foundation in Boulder, Colorado.

And further, of those with uncontrolled asthma, half reported smoking cannabis. We have also found that people with asthma are not routinely asked or counseled by their doctor about cannabis and how they use it.

For the survey, published in the journal Annals of Allergy, Asthma and Immunology, the team recruited nearly 500 adults, including 245 asthmatics.

Asthma is a chronic, incurable respiratory disease that causes inflammation or swelling of the airways, making it difficult to breathe.

Signs and symptoms include wheezing, shortness of breath, tight chest, and cough, and these may get worse during an asthma attack.

Almost 60% of people with asthma reported using cannabis at least once in the past or currently.

A total of 33 percent of people with uncontrolled asthma have ever used the herb and 20.6 percent were current users.

This is in comparison to about 12 percent of the American population who smoke marijuana.

These rates are similar to the rates seen in controlled asthma patients, of whom 39.9% were permanent users and 20.9% were current users.

Most patients reported positive effects from using the drug, with 75% saying it helped sleep, 68% each saying it calmed and reduced pain, and 67% reported decreased anxiety.

Meanwhile, only 21.6% said cannabis increased their anxiety, and 19.3% reported coughing.

Also, surprisingly, 60% of asthma patients said their doctors did not consider whether or not they were using marijuana.

“ In order to more fully manage their allergic / asthma patients, allergists should learn more about cannabis and educate themselves about cannabis use, including types of cannabinoids, route of use, reasons for use. and side effects, ” said study co-author and allergist Dr William Silvers.

He notes that smoking any substance, including marijuana, can irritate lung tissue and trigger an asthma attack.

“As with smoking, efforts should be made to reduce cannabis use and recommend other potentially safer routes such as edibles and sublingual tinctures.