Ordinary Stablecoin or XRP killer? What we know about the new JPMorgan Chase cryptocurrency 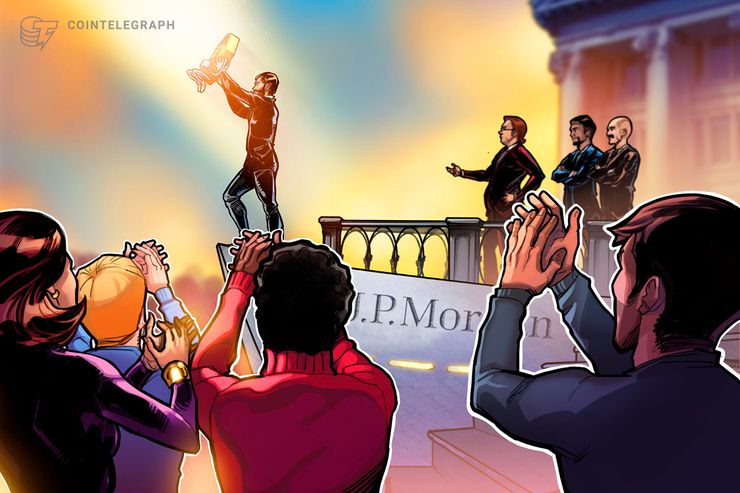 On February 14, US banking giant JPMorgan Chase announced its own cryptocurrency. Significantly, this is the first time a major US bank has exploited digital assets for direct use in business operations.

JPMorgan Chase, whose CEO, Jamie Dimon, is famous in the crypto community for his anti-Bitcoin remarks (BTC), is unexpected. Here are the main excerpts of reports and comments on the new virtual currency, called "JPM Coin".

JPM Coin aims to increase the effectiveness of the settlement, initially in three of its operations

The first is cross-border payments for large corporate customers, who currently use wire transfers provided by networks such as SWIFT, which means that it can take up to several business days. According to Farooq, payments using JPM Coin will be made instantly at any time of the day.

As a result, SWIFT, which currently manages more than half of all high-value cross-border payments, could also be challenged to update its payment system. Ripple (XRP), whose chief executive, Brad Garlinghouse, had recently said that "what we do daily is taking over from this 46-year-old Belgium-based interbank messaging service." SWIFT. Ripple announced several advances in the field of international payments, which would have reduced transaction costs by 40-70% with its xRapid platform and added several major banking institutions to its RippleNet network.

For its part, SWIFT has already started looking for the blockchain as one of the options for faster payments. In addition, it has strengthened its Global Payments Innovation (GPI) payment platform. Recently, the banking network launched the proof of concept of a gateway allowing the software company R3 to be connected to GPI.

Second, JPM Coin would be used to securities transactions. In April, the bank tested its Quorum Blockchain platform, in conjunction with National Bank of Canada and other players in the credit industry. The goal was to simplify start, settlement and interest rate payments, among other financial processes.

Specifically, as written Reuters, the trial "reflected the $ 150 million offer from the Canadian bank on the same day of a variable rate Yankee deposit certificate of one." year". Thus, institutional investors can use the JPM coin for instant settlements, as opposed to waiting for a bank transfer.

JPMorgan Chase created Quorum in 2016 as part of the Ethereum Enterprise Alliance (EEA), of which he is one of the founding partners. The platforms run on the Ethereum blockchain (ETH) and are modeled on the Ethereum Go client. It is currently used by pharmaceutical companies Pfizer and Genentech, as well as Microsoft Azure, among others. In March, JPMorgan Chase said it was considering making Quorum an independent entity as a way to attract more partners who might be scared if they are competitors of the bank.

Finally, the new cryptocurrency could be used by big companies such as Honeywell International and Facebook, which apparently would use JPMorgan Chase. cash services company replace the funds they hold in various subsidiaries around the world. According to CNBC, these companies generated for the lender a turnover of $ 9 billion in 2018. Farooq explained in a comment:

"The money is flowing around the world in a big company, is there a way to make sure that an affiliate can account for cash on the balance sheet without having to turn them over?" "So they can consolidate their money and probably get better rates for it."

The tests for the chip should begin "in a few months". However, only a small amount of the total funds involved in the above three areas would involve JPM Coin at the beginning. In total, JPMorgan Chase moves more than $ 6 trillion a day worldwide, according to CNBC. It is the largest bank in the country. As Farooq said:

"Almost all major corporations are our customers, as are most of the world's major banks. Even if it were limited to JPM clients at the institutional level, this should not hold us back. "

He also added that in the future, the lender's token could be used for payments on devices connected to the Internet as they migrated to the blockchain. Overall, the JPM representative seemed enthusiastic about the bank's technology outlook.

"So, all that currently exists in the world, as it passes through the blockchain, would be the payment leg of this transaction. The applications are frankly endless; anything that includes a large distributed book involving businesses or institutions can use it. "

According to the CNBC report, JPM coins are indexed to the US dollar so that its value remains stable – technically, this makes the new token a stablecoin, at least in its original form.

The coins would be returned to customers after depositing dollars at JPMorgan Chase. Once the chips are used for a payment or security purchase on the blockchain, the lender would allegedly destroy them and give customers an equivalent amount of fiat in return.

Overall, Stablecoins had a good year in 2018, becoming a growing trend among the most compliance-oriented players. For example, start-up Circle, backed by Goldman Sachs, launched its US dollar coin (USDC) in collaboration with the leading US cryptography system Coinbase. Services (NYDFS).

JPM Coin will be held on Quorum, the private blockchain of the ETH bank

According to a FAQ published by JPM the same day, CNBC announced that its token will initially be powered by the aforementioned Quorum blockchain (licensed, or, in other words, private), but will also become applicable to blockchain networks. in the future.

"The JPM piece will be issued on Quorum Blockchain and then extended to other platforms. JPM Coin will be usable on all standard Blockchain networks ", explains the guide.

On this basis, Jerry Brito, executive director of Coin Center, a crypto-currency and blockchain-centric non-profit research and advocacy center, told MarketWatch that JPM had simply launched an internal payment system instead. that a real cryptocurrency:

In addition, JPM Coin will eventually extend its role beyond the role of stablecoin, as indicated in the FAQ:

"Over time, JPM Coin will be extended to other major currencies. The capabilities of the product and technology are independent of the currency. "

For the moment, the token is designed to be used only by JPM institutional clients.

The chief executive of the bank, Jamie Dimon, may be anti-Bitcoin, but he is also pro-blockchain

JPMorgan Chase became known as a cryptocurrency participant in 2017 when CEO Jamie Dimon openly described Bitcoin as "fraud". In 2018, Dimon reaffirmed his position by saying that he did not "really give a – —" about Bitcoin.

However, at the World Economic Forum in Davos in 2019, when the CEO of JPMorgan Chase was asked whether he was satisfied with the satisfaction with the fall of cryptocurrency last year, he responded negatively and made positive comments on the technology that supports it.

In particular, Dimon said that he was pro-blockchain, despite the excessive hype around the technology. In his eyes, the blockchain better replaces some online databases:

"Blockchain is a real technology, it's just a database that we can all access and keep up-to-date."

Indeed, the banking giant has been studying blockchain since 2016, the year of the first publication of Quorum's white paper.

The announcement sparked mixed reactions from the community

Changpeng Zhao, CEO of Binance, praised the first US bank cryptocurrency, referring to Mahatma Ghandi "they ignore you first, then they make fun of you, then they fight you, then you win," according to the quote:

Cointelegraph has contacted Ripple for further comment on the subject. In response, the Ripple team sent the link to the tweet of its CEO, Brad Garlinghouse, who criticized the concept of digital coins issued by a bank (he calls them "bank coins") and JPM Coin, citing his centralized structure. :

As expected, banks are changing their tone on crypto. But this JPM project misses the point – introducing a closed network today is like launching AOL after Netscape's IPO. Two years later, bank coins are still not the solution https://t.co/39EAiSJwAz https://t.co/e7t7iz7h21

Notably two years ago, Garlinghouse wrote an article in which he claimed that such projects – in which bank transfers are made using unique digital tokens – are misguided and would inevitably lead to "a monetary landscape. even more fragmented than today:

However, some community members seem more confident about JPM Coin, suggesting that the new token is capable of widespread use, and could therefore overtake Ripple in the future. Tushar Jain, partner of Multicoin Capital wrote:

Banks will obviously never use the XRP for settlements and enrich Ripple Inc. (which owns more than half of the XRP). They prefer to enrich instead!

Congratulations to JPM for being first. They will wipe the floor with Ripple. https://t.co/Jkfkvr7BnE

If it turns out that the Blockchain / Coin box turns out to be a good choice for banks that transfer money, then the JPM Coin should absolutely clear Ripple

While it may be too early to say whether JPM Coin will be transferred to public blockchains and gain recognition among the crypto market players, some seem puzzled by its current capabilities. So, Nathaniel Popper, author of the book "Digital gold, a Bitcoin story", tweeted: