A new study reveals that young patients with colon cancer are often misdiagnosed early, which leads to the detection of the disease at an advanced stage.

In fact, more than 70% of patients aged 49 years and under are diagnosed when the cancer is stage III or IV.

Previous studies have suggested that people who have been diagnosed with colon cancer before the age of 50 are slow to receive treatment and have a low survival rate.

The Colorectal Cancer Alliance team said it hoped the results would lead to an awareness of colorectal cancer among young people and recognize signs that they could be tested before it happens. too late. 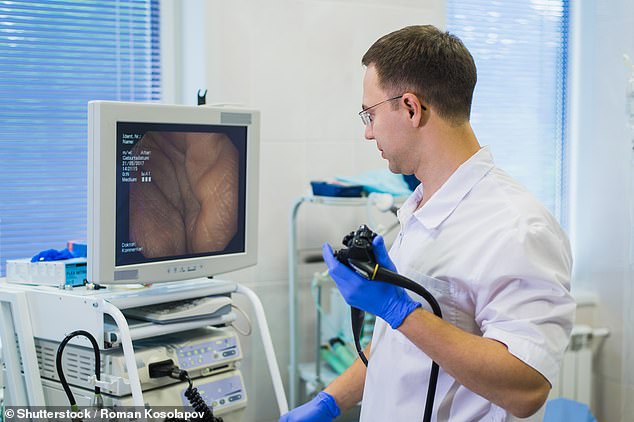 A new survey found that more than 70% of patients aged 49 years or younger had been diagnosed with stage III or IV colon cancer, while most patients over the age of 50 were diagnosed at stage I or in stage II (image of the file)

"Despite a decline in the incidence in older adults, the incidence of colorectal cancer in young adults has increased rapidly and alarmingly in recent decades," said Dr. Ronit Yarden, lead author , Director of Medical Affairs at the Colorectal Cancer Alliance.

"We do not yet know the cause of the increased incidence in younger patients, and health care providers are unaware of this trend."

Colon cancer is a cancer of the large intestine, part of the digestive tract where the body separates water and salt from solid waste.

Cancer usually starts with growths called polyps. They lie on the inner lining of the colon and become cancerous over many years.

A study published in 2017 found that the number of cases of colon cancer diagnosed in adults under 55 had doubled from 1990 to 2013, although no one really knows why.

In response, the American Cancer Society has updated its colorectal cancer screening guidelines, lowering the age of 50 to 45 years at which people at medium risk begin regular screening.

For the new survey, the team turned to social media to recruit young patients with colon cancer and survivors.

The results showed that about 63% of patients had expected their symptoms between the third and the twelfth month, often because they had not associated them with colon cancer.

According to the National Cancer Institute's SEER database, the five-year relative survival rate for people with stage I colon cancer is 92%.

However, once the cancer has spread to other parts of the body, such as the liver, it drops dramatically. The five-year relative survival rate for stage IV is about 12%.

According to the American Cancer Society, colorectal cancer is the third most common cancer in the United States, among both men and women.

It is also the third leading cause of cancer death among men and women in the United States. The number of deaths in 2019 is estimated at more than 51,000.

The researchers also found that 67% of patients consulted at least two doctors before getting a correct diagnosis, and that some saw up to four doctors.

Dr. Yarden said that obtaining the right diagnosis could be delayed because the symptoms, including constipation, fatigue and abdominal pain, could look like other health problems such as hemorrhoids or the inflammatory bowel syndrome.

But she says that many young people also do not know that they may be at risk of contracting the deadly disease.

"Young people should be aware that colorectal cancer can occur at any age and that it is not a disease of the elderly," she said. "Everyone should listen to his body and, if he does not feel well, go to the doctor to be tested."

The results will be presented at the annual meeting of the American Association for Cancer Research, which runs from March 29 to April 3 in Atlanta, Georgia.