How do hospitals prevent the spread of drug-resistant superbugs? 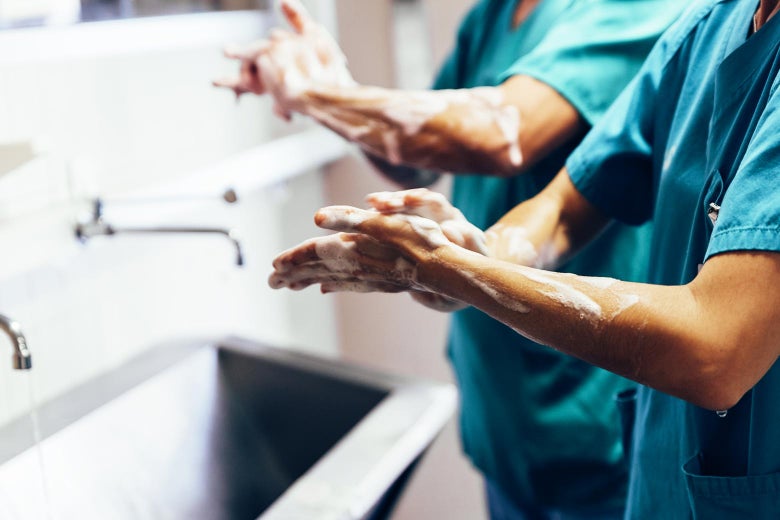 On Saturday, The New York Times published a fascinating and disturbing article on the rise of a resistant antifungal yeast called candida Auris in hospitals around the world. Patients with compromised immune systems are particularly susceptible and, once the fungus is reached, the infection spreads through the bloodstream and causes fever and chills. According to the Times, nearly half of those with the disease die within 90 days, although it is unclear whether they are killed by the pathogen or the diseases and conditions that led them to the hospital. C. auris can also survive for weeks on the outside of a patient: sinks and mattresses, door knobs and bedside tables. To eradicate it after the death of a patient, a Brooklyn hospital "even had to rip some of the ceiling and floor tiles" into his room. How often should hospitals take such extreme measures to stop the spread of these drug-resistant superbugs?

Fortunately, very rarely, but when they do, the necessary steps can be expensive and difficult. According to the CDC, hospitals can often manage epidemics simply by paying more attention to cleaning the environment and equipment surrounding a patient. Medical experts know how to eliminate just about everything we encounter with disinfectants. The hospital's standard quaternary ammonium compound, a common antimicrobial cleaner that kills many bacteria, fungi, amoebas and viruses, is used for daily cleaning and works most of the time. For viruses (such as noroviruses) and bacteria (such as the very live virus) Clostridioides difficult) who survive, the hospital may use a bleach-based cleanser or other disinfectant known to kill specific organisms.

In infectious epidemics, there is a general fear that we will encounter a strain of a familiar bacterium or fungus that has developed drug resistance that makes it difficult to die once it is installed in the patient's body. Hospitals are, unfortunately, a place where a patient is more likely to encounter a strain of something that is resistant to antibiotics. After all, they use a lot of antibiotics. This becomes particularly troublesome when it is associated with the longer life and robustness of more robust microbes such as C. auris and It's hard. Although most pathogens die when they are left without a host, these can survive for weeks or months.

When hospitals know they have an infection that can easily pass from one patient to another, they take precautionary measures in the event of a crisis. They isolate patients and prevent staff who treat them from caring for others. They organize meetings for the medical and cleaning staff to train them to the specific rules of the specific microbe. They require that visitors and staff wear gloves, gowns and masks in patients' rooms and increase their vigilance to ensure that no one leaves without washing their hands. (Thorough and careful hand washing can largely prevent pathogens from breaking loose.) Depending on the type of contaminant, they can also place patients in a ventilated room that does not allow air to circulate in the rest of the body. l & # 39; hospital. .

In extreme circumstances, like this one C. auris In the event of an epidemic, hospitals may have to tear parts to get to where microorganisms might live. As a general rule, hospitals are only obliged to dispose of objects that are more easily moved: infected mattresses or linen (as during a particularly tragic epidemic). Mycobacterium Abcessus in a pediatric hospital in New Orleans) or tools and other smaller sources of infection. In one case, in the 1970s, a green liquid soap used to clean the skin for intravenous insertions had been contaminated with the bacteria. Pseudomonas stutzeri. In a much more recent case, the Food and Drug Administration has identified two types of fungi, including: Aspergillus, the most common cause of fatal fungal infections, in vials of drugs administered to six patients in an experimental study.

It is not uncommon for a hospital to tackle plumbing more aggressively. Especially in old buildings, bacteria hang on and proliferate in sinks and pipes. When three people died of legionellosis at the University of Wisconsin Hospital in Madison last year, the hospital found the bacteria in its pipes and, like others in the same situation, he simply injected chlorine into the water. In other cases, the pipes must be torn off to be tested and disinfected. Recently, staff at the National Institutes of Health Clinic in Bethesda, Maryland, experimented with reducing the amount of bacteria that can grow in a water supply system by "literally removing plumbing and transformant ".

One of the most extreme reactions to an outbreak occurred in the same hospital during an antibiotic-resistant outbreak in 2011. Klebsiella pneumoniae carbapenemasesor KPC, a bacterium that can, as C. auris, cause infections in the blood stream or sores, leading to fevers, chills, bloody cough and possibly organ failure. Patients began to test for serious infections at a rate of about once a week and standard cleaning failed to halt the spread. Hospital staff ruptured the piping of some rooms to remove sink drains that contained the bacteria. They also used a robot to spray hydrogen peroxide into these empty rooms once the patients were transferred to a separate ICU. (According to the Centers for Disease Control and Prevention, this technique has not been tested or proven effective, so it is only recommended as an extra precaution after cleaning the rest by hand.) These cleaning and maintenance methods isolation eventually worked, but out of 18 patients infected with CPK that year, six died.

The case of NIH has shown how more advanced techniques than bleach and isolation can be useful in fighting outbreaks. A team of NIH researchers used genome sequencing to quickly decipher and trace the genetic code of the bacterium from one infection to another, to help the patient understand how it had spread. According to a 2013 study from the case, the technology allowed staff to determine that all patients had been infected with each other, not independently, and they were able to identify their areas of weakness. Advanced investigation approaches such as genetic sequencing have allowed hospitals to better track and confront new and aggressive drug-resistant strains that alarm the medical community.

The anxiety of some health professionals about C. auris is valid: it does not act as experts expected on the basis of other forms of candidaand this uncertainty translates into a need for caution. As experts become familiar with C. auris, they feel more confident about how to eradicate it from the environment and will probably not need to take such extreme measures as tearing off parts of the ceiling and walls – a simple cleaning with water Bleach would probably do the trick.

The real danger lies in human fallibility: if someone fails to clearly define the tasks, medical equipment may not get the disinfection and deep disinfection it needs in a crisis. Environmental services staff – people (sometimes underpaid) who clean the patient's room – are often not allowed to touch medical equipment, which can allow microbes to sneak up. Some medical equipment, such as X-ray machines, can not be reserved for a single patient, and hospitals may have difficulty eliminating bacteria from these large, complex devices. Manufacturers of hospital equipment can accidentally introduce contaminants into their products. And doctors and nurses, who often work long hours, are sensitive to the careless mistakes we make.

But still, patients should not worry too much a lot about how their hospital is preparing for these new infections. As Susan Matthews wrote in Slate, your risk of suffering even immunocompromised harm is extremely low.